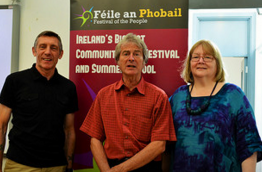 There were a number of public figures indicating shock at the news that Feile An Phobail had received some £500,000 in funding from DCAL over the past two years and had shared some of that money with other, smaller arts groups. The novelist Glenn Patterson said this would “take a lot of people by surprise”; the DUP’s Nelson McCausland said he was opposed to the money being distributed in this “secret way”.   Caral Ní Chuilín, the Arts Minister, said this was disgraceful talk, given that Feile An Phobail had provided a “business case, they’ve done evaluation, they’ve been through more due diligence and scrutiny than any other funded body”.

Well, you can see Glenn and Nelson’s point: you wouldn’t want to think that public money for the arts is being wasted – although there has been no suggestion that Feile An Phobail acted in any incorrect or unlawful way. But still, you know. Public money like that – half a million over two years – going to West Belfast’s Feile and all these other groups. It’d be really shocking if one side of the community was having funds diverted to it that might have gone to the other.

But be of good cheer, Glenn and Nelson. Public money is being used in support of artistic projects perhaps closer to their hearts.

In 2012-13, the PSNI Chief Constable said that policing the flag protests had cost £15 million (the CBI figured that the protests had cost them near to another £15 million in lost trade). And of course the Twaddell Camp is costing the public £300,000 each week. Yes, that’s each week, Virginia. So inside a fortnight, the Twaddell Camp swallows up more money than the Feile An Phobail got in the past two years. Being an economic illiterate, I’m afraid I can’t tell you what it costs to police Orange parades each year. But I do know that a Freedom of Information inquiry a while back established that 221 parades involving 1428 police officers cost £197,829.29. Given that there are well over 2,000 marches each year, you might be able to do the sums yourself.

I  would hope that’ll provide balm for Nelson’s artistic soul.