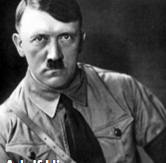 When Hitler came to power in 1933 the Communist HQ in Berlin was seized and members of that Party arrested and tortured in it. The Nazis captured the Party’s membership lists and played host to an MI5 Agent in that HQ, who copied them, in the company of the  resident MI6 agent in Britain’s Berlin Embassy. A recent article in the London Review of Books, which has not been challenged, goes into the matter in detail.

Dublin’s Irish Times editorially welcomed Hitler’s accession. In 1936 General Franco, who had been posted to the Canary Islands  lest he do the  Spanish Republic a mischief, was flown to Morocco by the British Colonel Hugh Pollard whence he launched his murderous mutiny and set upon his 40 year tyranny in Spain. Pollard became British MI6 Station Officer  in Madrid in 1940.

Pollard had form. During the life of the first Dail Eireann he was employed by the British in Dublin Castle as an “information” officer. His propaganda was so false, crude and scurrilous that it fooled nobody with more than two brain cells at the time, but it has  been regurgitated in some revisionist academic studies in recent years.

An entry in Wikipedia gives a brief but useful outline of the reprobate’s career.