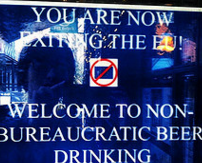 If Jim Allister didn’t exist, would we have to invent him so we’d know what a really right-wing politician looked and sounded like? He was holding forth yesterday on his position regarding Britain doing a BREXIT – leaving the EU- and he was passionate in his insistence that this would be a Good Thing. It would give “us” – i.e., Britain – control over”our” own trade deals, so “we” could trade with China, Brazil and other emerging economic power-houses, rather than have to wait while Brussels decided if “we” could or not.

Because Jim is such an effective debater, he made it sound almost convincing. Until, that is, you thought about it. For a start, the EU grew out of a profound wish on the part of the big European nations never again to go down the path that led to the First and Second World Wars. It’s easy to get so irritated with the economic aspects of the EU that you forget that. The EU has given us seventy years of peace in place of the two great convulsions of the twentieth century.

Where Jim is right, of course, is that the EU is cumbersome. It’s also unbalanced, with Germany and to a lesser extent France calling the shots while the rest of us fall into line. But of course what’s needed is not a BREXIT, but a reform of the EU, so that all the countries who are part of it are also privy to major decisions and feel themselves playing a full part in the making of those decisions. There’s no reason why Britain shouldn’t remain in the EU and forge deals with other countries. If not, what was the point of all that sucking up to the Chinese leader by Cameron a while back?

For a man of his intelligence, Jim is surprisingly blind to the implications of a BREXIT. Because if the UK were to leave the EU, and if Scotland were to favour staying in the EU – as they almost certainly would – you may be sure another independence referendum would be on the table superfast and the results would be different this time. With Scotland gone, what price the UK holding together? English nationalism alone would be sufficient to push towards its demise. And where would that then leave the unionist devotion to all things Ulster-Scots?

Face it, Jim: the shortest road to Irish re-unification is the road marked ‘BREXIT’.

Taking the world’s leaders by the nose
Hitler, Franco and Col. Hugh Pollard by Donal Kennedy

34 Responses to Jim Allister and his deep love for BREXIT