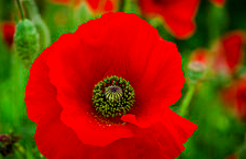 I really don’t mind if people choose to wear a poppy. I might wonder how those who do can justify giving their approval and respect to all the things British armed forces have done since the First World War, not least in Ireland. But it would be the individual’s choice in the end and they should be free to display where their loyalties lie, without fear of attack or intimidation, physical or verbal.

That said,  I look at my TV screen these days, especially the BBC, and I’m struck by the unfailing presence of the poppy on breast after breast. One of two possibilities must be the case: either  every presenter on TV is a genuine and uncritical supporter of the British armed forces (and it is support for the actions of British service men – and women – throughout the many decades and in many places, not just during the First World War); or else some people appearing on my screen have been instructed /feel pressured to wear the poppy. If the first of these options is the case, that’s fair enough , although I’m somewhat taken aback that  support for British armed forces is so unambiguously unanimous throughout the institution. If the second of these options is the case, then it is outrageous that an extremely powerful public institution – which we own –  has pressured/bullied some of its employees to display loyalties they don’t feel and  that we who own said institution stand back and allow it to happen.

It’d be good if we could hear from those running the BBC – even the BBC here in Belfast – which of the two it is.