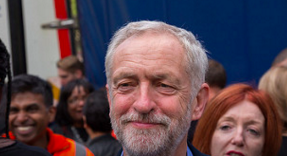 I’ve just watched a recording of this morning’s Andrew Marr show on BBC1 and it was revealing. If you went by the majority of  British newspapers, Jeremy Corbyn is Michael Foot without the brains and less dress-sense. His party is in revolt against him, he doesn’t want to stand shoulder-to-shoulder with France, and his parliamentary colleagues will probably throw him out after the Oldham by-election. With the verbal onslaught so thick and fast from within and without, Jeremy was probably somewhere in a cellar, on the floor in foetal position, whimpering.

Then who was this relaxed figure neatly dressed in a navy suit, collar and tie, trimmed beard, listening carefully to Marr’s questions and responding thoughtfully? ‘Strewth, it’s that there Jeremy Corbyn! Who’d have thunk it?

“Are you a pacifist?” Marr wanted to know. “No I’m not. But I do think that resort to acts of violence and war should be the last option, not the first.”

“MPs in your party feel betrayed by you”.

“I was elected by the party” Corbyn replied. He added that he’d emailed party members on the bombing Syria question and had responses from 70,000 of them.

“Are you going to ‘whip’ party members on this issue?”.  Corbyn politely told him he’d decide that in his own good time. “This is a debate over foreign policy – it shouldn’t be used as a way getting one over on another political party”.

Marr sighed. This wasn’t going the way it should. “Yes but it’s been a terrible, terrible few weeks for you”.

“It’s been weeks in which we’ve increased our party membership, we’ve forced the Chancellor to do a U-turn on punitive measures.”

“But there’s talk of a coup against you”.

“Some people are still not used to the fact that the Labour party is in a different place now. I have a clear mandate from the membership and far from finding my job terrible, I’m enjoying every minute of it”.

You might say that, at the end of the interview, there was one man left standing  and it wasn’t Andrew Marr. Maybe it’s time the MPs who led Labour to two consecutive defeats in general elections stopped doing the jingoist thing and recognised that they have a leader who has brought something new and exciting to their party.