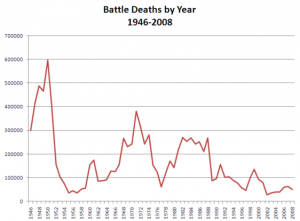 Good news: there’s not as much violence around as there was. That’s on the domestic level and the international level. For example, violent crime in 2014 in the US was down 4.4% – the lowest since 1948. In the UK the drop was even more striking : 10%.

Various reasons are given for this. Some say that the number of incarcerations, particularly in the US, discourages crime. Others point to the ubiquitous CCTV cameras. Other say it’s because we’ve got an ageing population in the West – criminals can’t run as fast as they used to.

And, amazingly, there are fewer deaths in war.  The past ten years have seen fewer battle fatalities than  any previous decade. Mind you, that’s compared to a pretty ghastly set of decades before that – think of WW1 and WW2. Then think of the Cold War between the US and the USSR – it remained cold and didn’t, despite a number of near shaves, spill over into outright confrontation.

Maybe we’re getting a bit smarter. As a guest on BBC Radio Four’s Today programme said this morning, violence is an incredibly dumb way to resolve problems. We disagree on something. I kill you or you kill me. Now we don’t disagree, because one of us is dead. Stupid or what?

Here in our own little tormented NE corner, as Alastair Campbell pointed out in BBC NI’s The View last week, our society has been transformed. Yes, there’s violence – that attack on the PSNI car two days ago, for example – and yes, there’s bigotry and hatred. But there’s a general acceptance that we have to address our differences through discussion and political means, not with guns and explosives.

The irony of all this, of course, is that this weekend, the British Labour Party is in crisis mode. Why is that? Because Jeremy Corbyn isn’t fit to lead them, let alone lead his country. How do we know that? First, he said he wouldn’t press the nuclear button; and now he’s said he’s not in favour of Britain joining the Bombing Club in Syria. There’s talk of his being dumped by the party – imagine a man who’s reluctant to kill people daring to claim leadership of a political party.

Violence here may have decreased, but there is still a hard core that chafes at the restrictions of politics. Violence on the international stage may have declined, but the two main political parties in Britain seem determined to see that it doesn’t die out. And yes, Virginia, that’s the same two political parties that lectured us again and again during the Troubles, that we should seek to resolve our differences amicably.

Hypocrisy and stupidity: a formidable combination.

11 Responses to The quick way to settle differences