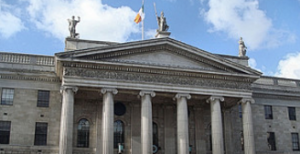 It’s an indisputable fact that the Easter Rising is one of the most significant events in Irish History. The Easter Rising rocked Irish society and permanently transformed the lives of and relationships between Unionists, Nationalists, Republicans and Loyalists thenceforth. As we approach the centenary of this event, one that is often misinterpreted and misunderstood, I envisage addressing, in a series of articles, many aspects of the Rising. Firstly, I would like to examine the significance of the Easter Rising.

The Easter Rising was planned by a generation who envisaged striking a “blow for Irish freedom” to “reignite Ireland’s national consciousness” (Tom Clarke) that had been in decline since the 1867 Fenian uprising. Clarke and others feared Ireland was asleep – this rebellion aimed to continue Ireland’s tradition of striking to remove the British presence in Ireland – it would be a reawakening to save the Irish identity. In the early 20th century, many people were content to remain within the union, enacted by Britain in 1801, and many subsequently served in the British Army during various wars, including World War One. The Rising was to significantly alter the consociation between Ireland and Britain. These past few years have witnessed acts of reconciliation between both countries to improve this once erroneous relationship.

According to Michael Laffan, for Tom Clarke “the conditions for revolution had just arrived on time.” The Proclamation of the Irish Republic, as read by Patrick Pearse at the front of the GPO, on 24th April 1916, stated that “six times during the past three hundred years” Ireland, through revolutionary groupings, had struck against Britain. In context, the Easter Rising was the first major rebellion in Ireland against British rule in Ireland since the United Irishmen Rebellion of 1798. Others had occurred during that time, although were put down with relative ease. That same proclamation that was read out on Easter Monday holds modern day significance, as many see it as a template for a fair and equal Republic, that has yet to be achieved yet remains an ideological aspiration.

For almost a week in 1916, this “new generation, re-baptised in the Fenian faith”, a conglomeration of Irish Republican Brotherhood, Irish Volunteers and Irish Citizens Army members, held key strategic buildings in Dublin. Unbeknown to the British Government, roughly 1500 poorly armed rebels, aimed to “carry out the Fenian programme”, to take on the military might of the British Empire.

There is no arguing that the Easter Rising, in its entirety, was a complete military failure. But perhaps the main significance of the Rising was the huge consequences that emanated from it. The changed political landscape in Ireland, after the Rising, could not have been predicted before it. After the “unconditional surrender” by Pearse to General Lowe, British authorities began their task of putting down the Rebellion. The task was handed to military governor, General Sir John Maxwell, whose intention was “arrest all dangerous Sinn Feiners” propelling his legacy as “the man who lost Ireland.” In the aftermath of the Rising, British authorities arrested some 3,430 people, 1,480 were sent to prison with 90 sentenced the death, 75 subsequently commuted. Coupled with these factors, the execution of the leaders, helped radicalise the attitudes of many towards the British and convince people that National self-determination was what they wanted. Many people, according to the Irish Party deputy leader, John Dillion, “were not favourable to the insurrection.” This changed. Russell Rees rightly states that the “executions helped create the conditions for a sea change in Nationalist opinion.” “All changed, changed utterly.” The deaths of the Easter Rising leaders tapped into the national and religious psyche, creating a wave of sympathy, turning military defeat into a future political triumph.

The Easter Rising is also significant for destroying the Home Rule project, that has been in motion, since Prime Minister Gladstone’s conversion in 1886. The notion of an Irish Parliament, making Irish decisions within the context of the British Empire had been the failed project of the great Daniel O’ Connell and Charles Stewart Parnell. Up until 1914, Home Rule, that had been so long promised, yet had not materialised, was in touching distance. The compromises and partitionist talk of the time had many doubting whether Home Rule was ever going to happen in an All-Ireland context. In 1915, the Bishop of Killaloe, aware of the great revulsion in Ireland, stated to John Redmond, “Home Rule is dead.” By 1916 the Home Rule project was not only dead, but it was buried, as the slogan of national self determination permeated.

The move from constitutional nationalism to republicanism was another significant factor of the Rising. After September 1914, the Irish Party’s support for the British war effort at Woodensbridge was to continually hunt Redmond, the longer the war continued. This would have a devastating effect on the Irish Party. Maurice Moore, the contemporary, writing to John Dillon in 1916, stated, “people have lost faith in the Irish Party.” Richard English, believes the “1916 Rising destroyed the Irish Party”, a rapid influx of young, dynamic men and women took advantage of the mistaken association of Sinn Fein to the Rising and threw their weight behind them. The Rising succeeded in a new generation becoming more politically aware and active. This culminated in electoral successes in by-elections during 1917 and a landslide victory, that decimated and allowed Sinn Fein to supplant the Irish Party. The significance, this was the end of the Irish Party, the constitutional representatives of Nationalist Ireland, had been obliterated.

Some see the Easter Rising as significant event, due to a few blood-minded individuals who set a precedent for other countries to challenge the integrity of the British Empire. It further became a symbolic moment for post partition Republicans to fight for and endeavour to achieve through military and political means the visions as set out and enshrined in the Irish Proclamation. Many of those who were involved in future conflicts would see the Easter Rising leaders as martyrs, inspired by their dedication and commitment to the cause of Ireland. Some claim that after the Rising, divisions were further exaserbated between Ulster Unionists and Irish Nationalists. Russell Rees, talks of “hardened Unionist attitudes” after the Rising created ongoing tensions between the groupings and leading to a decline in Irish Unionism in a more radical southern state.

The 1916 Rising led to directly to the emergence of the Irish Republican Army who committed themselves to armed struggle, replacement the messianic concepts of 1916 with a hard edged reality and ruthlessness that culminating in the War of Independence.

It has often been disputed whether the rebel leaders believed they had any chance of success or was this simply a “blood sacrifice.” The Irish Proclamation illustrates the leaders acted “in full confidence of victory.” Patrick Pearse in his writings would be more inclined to support the notion of “blood sacrifice”, “it took the blood of the Son of God to redeem the world, it will take the blood of the Sons of Ireland to redeem Ireland.” What was clear, was the sacrifice of Pearse et al resurrected Ireland. Pearse had previously stated that success was unlikely and that “we are going out to be slaughtered.” The leaders were under no illusions about the inevitability of defeat and death as in some instances, they had chosen to make themselves sacrificial heroes.

The 1916 Easter Rising was a significant event. Some people would argue that the event led to the foundation of a democratic state and other feel it was the pivotal event that cemented partition (previous blog I argue against this). Others believe that the consequences of that event are still being felt and that the ideals espoused by the leaders have never been fully achieved, therefore it was a failure. In this respect, therefore, the 1916 Rising became both an inspiration and an albatross for Ireland and Irish Republicanism. What was significant was their ability to envision what was ahead compounded in Patrick Pearse stating, “we seem to have lost. We have not lost. To refuse to fight would have been to lose; to fight is to win. We have kept faith with the past, and handed down a tradition to the future.” The handing down of this tradition was eagerly accepted as history illustrated.

Next week: The Irish Republican Brotherhood and the planning of the Easter Rising