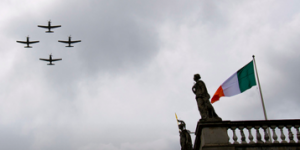 Previous blog: “England’s difficulty would be Ireland’s opportunity” – The IRB and the planning of the Easter Rising (Part 2)

The failure of the Aud to land weapons and the subsequent confusion over Eoin MacNeill’s countermand order, had torpedoed the IRB Military Councils plans. Before the crucial crunch meeting at Liberty Hall on Easter Sunday morning to deal with the consequences of MacNeill’s order, some of the Military Council ate a breakfast of bacon and eggs cooked by Nora Connolly, daughter of ICA leader James Connolly – they feared their “hopes and dreams would be dashed.” After a four hour frenzied meeting at Liberty Hall, the Military Council decided to postpone the Rising until noon, Easter Monday – a delay that gave the conspirators a day to devise and implement their new arrangements. It was during this decisive meeting that the draft of the Proclamation was scrutinised by the Military Council and when approved, given to the printer, Christopher Brady, who printed 2,500 copies.

Events of the previous hours had a cataclysmic effect on the main protagonists. Sean MacDermott was “so annoyed and upset that his mind refused to act.” Tom Clarke was “crushed.” Patrick Pearse, was “ so silent and disturbed … He could not speak to anyone.” For James Connolly, “the tears ran down his face.” Tom Clarke, who wanted to strike immediately, left Liberty Hall that Sunday afternoon a “devastated man”. According to his bodyguard Sean McGarry, “He was weary and seemed crestfallen. He was very silent.” This was in comparison to earlier in the week where he appeared with “joyous elation” and “exhilaration.”

Contempt for Eoin MacNeill was in abundance. The “Kimmage refugees” who made up a section of  the Dublin Volunteers, spent Easter Sunday plotting revenge against MacNeill. At Liberty Hall, headquarters of the ICA, Countess Markievicz brandished a pistol with the intention of shooting MacNeill. Publicly, Pearse sent messages to local commandants confirming MacNeill’s cancellation order, whilst simultaneously, he began secretly drafting fresh orders confirming that the Rising would proceed. As word spread throughout the City, Connolly brought his ICA on one last short parade practice route. On return to Liberty Hall, Connolly made what proved to be his last public speech, telling his followers that they were not to lay down their arms until they had struck a blow for Ireland. Most ICA spent their last night in Liberty Hall playing tunes and singing Irish ballads, as some went to visit their nearest and dearest.

For MacNeill the worst seemed to be over as the Military Council delved deep into deception. Military Council leader, Thomas MacDonagh arrived at MacNeill’s residence and assured him, “that everything was off.” Later MacNeill wrote, “On the evening of Easter Sunday I believed with full assurance that the efforts had completely succeeded.” But, in reality, the Military Council could not go back now. Two years of detailed planning, two years of dedication and commitment – to them it was never destined to end this way! That night MacNeill went to bed the happiest man in the world. Pearse meanwhile was engaged in turning MacNeill’s dreams into a nightmare – by late evening couriers were dispatched to local Volunteer commandants throughout the country: “We start operations at noon today, Monday. Carry out your instructions. PH Pearse.” In churches across Dublin, men were attending mass to “clean the slate.” Some spent last moments with their wives, children and families. Two members of the Military Council spent their last night as home – Eamonn Ceannt and Tom Clarke. Across Dublin that Sunday evening, five of the Military Council went to bed in safe houses – some cried, some were openly defeatist, others demoralised with the confusion but an air of anxiety and excitement prevailed. The scene was now set.

Easter Monday, 24th April 1916, was a bank holiday in Dublin. A gloriously sunny and silent day met the awakening city. Volunteers and members of the Irish Citizens Army began to arrive at a very busy Liberty Hall. Inside the building engineers were assembling bombs. Not too far away in Dublin Castle a discussion about the political situation ensued. Arrests and internment of Volunteers was the topic of conversation. However, Irish Under Secretary, Matthew Nathan believed these could wait as an imminent Rising seems to have been averted. Scouts around Dublin under Connolly’s orders were observing for unusual troop movement, fearful of a last minute government swoop. Instead the government were sleeping at the wheel.

Across Dublin, the Dublin brigade of the Irish Volunteers, commanded by Count George Plunkett (Father of Military Council member, Joseph Plunkett) boarded a tram armed with rifles. Plunkett boarding the tram paid “59 two penny fares” and demanded the driver not to “stop before we reach O’Connell Bridge.” On board passengers were dismayed and protested as the Volunteers sang rebels songs. When they disembarked the Volunteers marched to Liberty Hall where there was a buzz of excitement.

As the morning proceeded, the Military Council began mobilising at Liberty Hall. Tom Clarke, after breakfast, left home accompanied by two body guards and headed for Liberty Hall. As he kissed his wife Kathleen and children for the last time, he made a promise to her that whatever happened, he would never surrender. In Liberty Hall he was observed as being “very happy.” Clarke did not wear a uniform but carried a revolver and bandolier. Sean MacDermott having stayed in Fleming’s Hotel, made his way on foot, albeit limping heavily on a stick, a result of polio. Patrick Pearse and his brother Willie, having slept in their uniforms, finished breakfast before cycling to Liberty Hall. They arrived with “broad brimmed hats pinned to one side and the Volunteer badge.” The terminally ill Joseph Plunkett had spent the previous night in the Metropole Hotel. He arrived at Liberty Hall “dressed beautifully with riding boots and spurs.” Thomas MacDonagh who would later occupy Jacob’s Biscuit Factory met the other members of the Military Council at Liberty Hall. The previous night he penned, “I have had one motive in all my actions, namely the good of my country.” James Connolly was already at Liberty Hall, having spent the night there. Dressed in a bottle green uniform issuing commands and preparing the combined forces for the heat of battle. The only absentee was Eamonn Ceannt who was at home preparing to lead his men to the South Dublin Union. As his wife, Aine, helped him with his Sam Browne Belt, he kissed his son Eamonn and in Irish gave his blessings as he soon parted. At 11am the O’Rahilly, opposed previously to the Rising, suddenly appeared in a car laden with rifles remarking, “It is madness, but it is glorious madness.”

As assembled Volunteers and ICA units fell into line, James Connolly issued his final orders. The first to leave Liberty Hall were ICA Units to begin their assaults on City Hall and St Stephen’s Green. A larger force of about 150 Volunteers, in lines of fours, left Liberty Hall shortly afterwards destined for the GPO, to be used as the Rebel and government of the Irish Republic headquarters. The parade included two wagons loaded with weaponry. Before they left off there was a final weapon and equipment check amongst the forces. Many amongst them shook hands and wished each other luck as their call of duty awaited them. Some of those marching wore the fern green uniform of the Irish Volunteers, whilst others wore the bottle green of the ICA. Cumann na mBan members turned out impeccably dressed in light green tunics and long skirts. The Volunteers were led by Commandants James Connolly, Patrick Pearse and Joseph Plunkett. Plunkett was by far the most flamboyant of the group with several rings and carrying a sheathed sabre by his side. The weapons on display were quite diverse. Some carried Mausers, others Lee Enfields and single shot Martini-Henry rifles. A variety of pistols, shotguns and pikes were also in the possession of many. Tom Clarke and Sean MacDermott did not take part in the Volunteer March. The pair had gone ahead by car and stood waiting at the corner of the GPO for the parade to arrive.

When the parade arrived in Sackville Street (now O’Connell Street), Connolly ordered it to wheel left as the rebels faced the imposing building. Then, a sudden order, “The GPO, charge!” as the Angelus bells pealed for 12 noon, the Volunteers were galvanised into action. Once inside Connolly’s voice rang out stating “Everyone outside” as a shot rang out from his pistol. Customers and staff within the GPO were dismayed. Anyone of British military credentials was taken into custody. The haul of ammunition from the carts was brought inside. Connolly ordered all windows to be smashed. Tom Clarke gave the proclamation to Patrick Pearse, and sent him to the front of the building to read it to the gathered crowd, accompanied by Connolly. Under the six pillars of the GPO, Pearse proclaimed an Irish Republic. This was met with a mixture of bafflement and derision. As the Provisional President had finished reading, Connolly grasped him by the hand and stated, “Thanks be to God, Pearse, that we have lived to see this day!” Two flags were raised above the GPO, an Irish Tricolour and a green flag with the inscription “Irish Republic” emblazoned on it. For Clarke and MacDermott, participating in the military action in the GPO was not the point. They had achieved their objective which was to have an insurrection. As both men stood in he GPO watching the Volunteers in full preparation “beaming satisfaction and expressing congratulations.”

The pre emptive strike favoured by the Military Council had resulted in the desired element of surprise – the British taken unawares.. All changed in Dublin that day, changed utterly, changed forever … The Easter Rising was now born.

5 Responses to ‘All changed, changed utterly, the Easter Rising was born.’ (Part 3) by Ciaran Mc