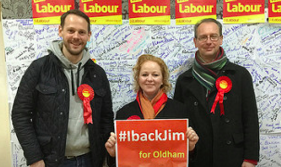 What was it the media have been telling us for the past couple of weeks? Yes, of course – bombing Syria is a great idea and Hilary Benn is a demi-god. But apart from that? Well done, Virginia. That the by-election in Oldham would be the first real test of Jeremy Corbyn’s leadership of the Labour Party.

So how did he do? Well, the Labour candidate Jim McMahon (sounds like a paddy to me) increased Labour’s share of the vote to 62.27%, which is up 7.49%. Pretty convincing, eh? Clearly Corbyn has more than justified his leadership, then.

Um, not quite. The Guardian, a distinctly liberal newspaper, notes that while Corbynistas will see it as a vindication of their man, those opposed will see it as a win by “a pro-business pragmatist”. (As distinct from an anti-business, pie-in-the-sky-ist, and we all know who that is.)

The Daily Telegraph declares that “winning the Oldham by-election isn’t a triumph for Jeremy Corbyn. It’s the minimum”. It goes on: “So now we know the formula for a Labour win. After Oldham West and Ryton we can see what is needed is a Blairite candidate, a Blairite speech on security in the Commons and total censorship of the leader. Simples”.

The Daily Mail’s headline is “Labour’s great escape: Party shrugs off the Corbyn effect to win Oldham West”.   The Sun notes that “Mr Corbyn visited the seat just once since MP Michael Meacher died in October”.

And there was you, thinking this was going to be the first real test of Jeremy Corbyn’s leadership. When the press decide to kick a political leader, it doesn’t matter what s/he does: There Will Be Kicking. Ask Gerry Adams.

16 Responses to I read the news today – Oh boy…