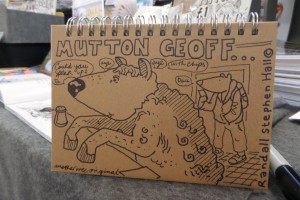 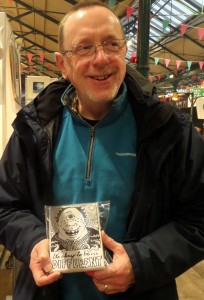 In the Buff for Christmas.

So how did all this begin? If you had said to me that, come this Christmas I’d be working a stall in St. George’s Market, Belfast, I would have replied . . . “and how will that happen?”

Over the years, from 1995 to now I’ve worked on a number of illustrated book projects, created a lot of imagery, made an animated DVD and few music CDs. Things have just accumulated over time in a random unpredictable way. My daughters were both under ten when all this began.

My eldest daughter now sells some of my books, prints, T-shirts and other things I’ve made at a stall in St. George’s Market in central Belfast. It’s her business. Her idea. She has a commercial imagination. I’m wired differently, though we are cut from the same cloth.

I quickly learned from her that things don’t come easy. You don’t just get a stall and walk into the opportunity. You begin as a casual trader first with no guarantee of a place week by week. You earn points each week until eventually you have a regular slot. It has only taken two years. Without her effort there would be no stall. She’s some girl.

I helped her out a few times on a Friday. I felt a bit surplus to requirements other than carrying bags, boxes and the conversations we had, but the thing I noticed about St. George’s Market was the people and the variety of things that were sold there.

I can remember, away back in the 1990s wandering in past the fish counters and around the place to look at old record stalls, bric-a-brac, food, clothes and all manner of stuff. The stall holders would banter each other . . . “Where’d you get a face like that mutton chops, and you workin’ the fish counter?” Translated from Belfast speak into pure sentiment it means “Hey, I’m happy in your company and I wouldn’t have it any other way, sunshine”. (In Face Book-ian that would mean “Smiley face . . .”.)

When my eldest had her second wee girl, my wife and I stepped up to “man/woman” the stall from August on until the present day. The first few weeks, as I sat zombie like, over hot porridge and oat cakes, I would rather have crawled back into bed and pulled the duvet up around my chinny-chin-chin. But, as the weeks passed I started to get used to the rhythm and routine of, what to me seems like , life in the circus. I’m like the dancing bear, except it’s just my pen and my head that dance quietly in front of our stall.

Once off-loaded and carried in, we set up the stall. Half way through this I normally slip off for a sausage soda, followed by a black coffee. For me that settling in process gets the day started (like an athlete stretching before a race . . . “Aye right big lad?”. Well, you get the sense of what I mean.

As I sit in the market the world of the stalls and the early arrivals for food and coffee begins to slowly rotate about me like a Belfast space station in low orbit, not far from Central Station itself. When “Central” was originally named it certainly didn’t seem too central, though now, it does.

The smell of coffee, bacon, sausages, soup and Belfast Baps all collect above me. So I stand up, bring a cappuccino to my wife, gather up my pens, set up my seat and begin to pour these random thoughts onto the covers of some fresh “Buff Books”. I enjoy this as people go by. Some smile, some watch. Children linger. One wee boys grabs his daddy and pulls him back to our stall to watch a drawing in progress.

“Yes.” He says (the father). . . “That’s almost as good as one of yours.” They move along, leaving the double edged compliment to linger around my seat like a spilled coffee cup. “There’s nowt as strange as folks”, I think to myself. Feeling lucky to watch moments like these.

Drawing in public is a thing I have learned to do through workshops in schools with children, though these wee original drawings are relatively small and varied. What ever thoughts arrive at the door of my head I will put on a Buff Book. (within reason). Why are they called Buff Books? Well, it’s because they are Buff and all those influences from the Beano, DC Comics from the early sixties, Robert Crumb’s counter culture, record sleeves, Radio Four comedy etc all gather around my wee chair and pen, almost unaware of the crowds that pass by our stall.

This all began because, to be honest, standing or sitting by a stall can be a bit mind numbing. The time passes more easily and, at the end of the day, you have something else to sell and you can explain your work to anyone who asks. It has led to some interesting conversations with locals and tourists travelling through Belfast. It’s nice to see them pause and observe them smiling at my work. That is a reward in itself.

So what began as, a bit of a pain, to a man who isn’t great in the morning, has evolved into something else. A collection of Buff Books and the odd wee Canvas. (Some, quite odd indeed.)

As the Christmas week approaches we are preparing to do some extra days at St. George’s Market. I’ve learned a lot in a short period of time and I’m often amazed at what can turn up from just your random thoughts that you can then pop in a bag and sell.

View all posts by Randall Stephen Hall →
ARE YOU UP FOR SNUFF? by Donal Kennedy
Christmas Photos

3 Responses to In the Buff for Christmas,