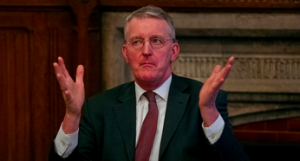 They say Tony Benn wept in the Visitors’ Gallery of the House of Commons as he watched his son Hilary make his maiden speech as an MP. Had he been alive last night, he would surely have wept again, this time from shame rather than pride.

By all accounts  Benn’s speech was the speech of the night. He tore a strip off David Cameron for his handling of the whole Syria affair, while at the same time urging support of the motion for bombing Syria. Indirectly he tore into his own leader, Jeremy Corbyn, by recalling the involvement of trade unions and socialists against the tyranny of Hitler and Mussolini. When he had finished there was applause, in some cases standing applause, for his speech. Maria Eagle, late of this parish, leaned across Jeremy Corbyn to shake his hand.

A number of Labour MPs have been complaining that they have received abusive emails because they were planning to or had voted for bombing. A Labour councillor described Momentum, the group supporting Jeremy Corbyn, as “scum”. The chair of the Stop The War campaign said those Labour MPs who had voted for bombing “should be branded with infamy for the rest of their political careers”.  George Galloway said receiving a few angry emails hardly compared with the suffering that would now be unleashed on innocent Syrians.

They don’t mind name-calling or making bloody decisions in the House of Commons. Just imagine if a politician over here were to urge violence against others, or describe others as scum, or formally congratulate the perpetrators when the violence has been inflicted….Eh?  Ken Magennis, you say.  And Tom Elliott. What about them?

‘All changed, changed utterly, the Easter Rising was born.’ (Part 3) by Ciaran Mc
‘Remembering past deeds’ by Donal Kennedy

20 Responses to On supporting violence to achieve political ends