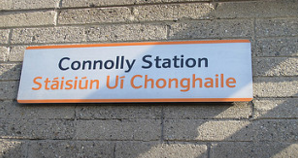 In Dublin last Thursday I walked the walk where the first shots fired in anger in Western Europe rang out in 1914. But there is nothing to inform today’s citizens or visitors about them

Last Friday on Platform 4 of Amiens Street Station I saw again the memorial plaque erected to ex-employees of the Great Northern Railway killed in the Great War of 1914-1918 and the Greater War of 1939-1945, in the service of the British Empire. It has been there since long before I was born. It is right that it remains there as a witness to the station’s history,
Beside that plaque is another placed there in 1966,  carrying, in Irish and English, the Republican Declaration of Independence,and the names of its seven signatories, who witnessed their sincerity before British firing squads in 1916. The plaque also records the dedication of the station to the memory of James Connolly, one of the signatories. It is right that it too should remain
there as witness to that time.
The men killed in the Great War faced armed opponents, and the seven signatories offered armed defiance of other armed men.
But the four men shot dead in Bachelors Walk, and the thirty or so wounded by rifle fire on July 26 1914, were unarmed civilians.Those who shot them were from the King’s Own Scottish Borderers. A recent commanding officer of that Regiment, Chris Darnell, recently boasted, in History Today that in 1989 at Derryard, near Roslea, his Regiment broke the heart and will of the IRA and that it played a constructive part in the Peace Process.
The KOSB commissioned a painting of their 1989 action. Perhaps Dublin Corporation or even the Oireachtas should commission another of their 1914 heroics to hang facing it in their Mess.
A memorial to those shot on Bachelors Walk is long overdue and  Mr Darnell and other members of the King’s Own Scottish Borderers should be invited to its unveiling. For are not the KOSB  the Alpha and the Omega of modern Irish history?.