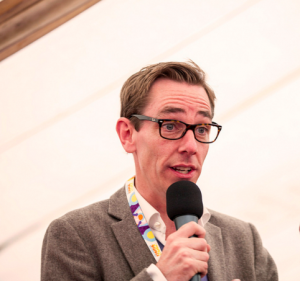 Ryan Tubridy is none of your Mickey Muds or Paddy Stinks. He was the featured personality on RTÉ’s Ireland’s Rising last night, and while your grandfather and mine were probably digging ditches to put bread on the table, Ryan’s granda was a GP. Going back a further generation, his great-grandfather and great-grandmother were principals of a local school in the west of Ireland. We even saw a very long, newsy letter she’d written to Roger Casement; and we heard how Casement regretted that the Germans had dropped him off on a beach in Kerry, from where he was taken to London and his death. If only they’d dropped him off in Carrowroe, in the west of Ireland, “it’d have been a much more interesting day at the office”, as Ryan put it. (Look, Virginia, that’s how Ryan talks. OK?)

The rest of the programme dealt with the mustering of 500 or more men in the west of Ireland, and their disbanding after a few days, on word that the Sherwood Foresters were on their way.

Should Ryan, should Irish people be proud of what these men and women did a hundred years ago?. After all, they did engage in violence. And isn’t it true that more civilians were killed in the Rising than participants?

Tush pish, according to Ryan. “Take out those medals, dust them off, put them on the wall. And when you look at the tricolour, remember these were good decent men and women, and remember the rightness of the cause they fought for”.

Throughout the programme, Ryan kept talking about “this country” which I assumed was Ireland. But now I’m not so sure. Because we were urged to go to www.ireland’srising/partners, where we would find what Easter Rising-linked events occurred just a century ago in our county. So I went and searched for Tyrone…It wasn’t there. Neither was Antrim. Or Armagh. Or Derry. Or Down. Or Fermanagh. So clearly when Ryan says “our country” and celebrates the violence which led to its creation, he’s talking about the twenty-six counties, not the six. Phew. A relief, that. Wouldn’t want to be linked to a bunch of people who celebrate violence.