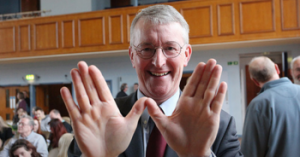 So did you watch the Hilary Benn speech? Listen to it? The one where he was applauded roundly at the end by MPs from both Conservative and Labour benches? I’ve just replayed it on my laptop and I’m a bit puzzled.

There are people who say it’s wrong – offensive, even – to believe that Hilary Benn’s speech would have been rejected completely by his father Tony Benn. Benn’s grand-daughter was one such: she said it was hurtful and disrespectful.  To which I say: Fiddlesticks. Of course Hilary is entitled to be his own man with his own views on events. But of course you think of Hilary’s lineage when he speaks – it’s impossible not to, such is the spooky resemblance between his father and him. And of course it was Hilary’s lineage that made it all the sweeter for the Tories to hear him support their line on bombing, and why they bayed “Heah, heah!” so loudly when he at last sat down. If it had been some ordinary Joe Soap or Mary Moisturiser who’d been speaking, the response would have been next to nil.

Finally, the speech was made with a view to showing his own party  and the Tories  what a properly dressed, properly compliant leader of the Labour Party looks and sounds like.

22 Responses to That Hilary Benn speech