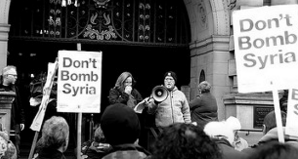 Non-surprise of the day: the entire unionist contingent at Westminster will tonight vote in favour of British war planes bombing Syria (forget ‘air-strikes’, it’s bombing). This will inevitably result in the killing of not just members of IS or other armed groups but innocent Syrian civilians. Both the UUP and the DUP will lend their support to this action.

When the Omagh bomb exploded, killing twenty-nine people, Ken Magennis of the UUP declared “This is a dreadful crime against humanity”. The leader of the UUP, David Trimble, said: “Make no mistake about it, this bomb would not have been made or been detonated if Sinn Féin-IRA had handed over its explosives and weapons”. David Trimble is no longer leader of the UUP but maybe a word to Mike Nesbitt and present UUP politicians: Make no mistake about it, the bombs that will fall on Syria killing unknown numbers of Syrian civilians would not have fallen if parties like the UUP had not given the slaughter their backing.

Peter Robinson, present leader of the DUP, responded to the Omagh bomb by accusing the NIO who, he said, “spawned the process of buying off the terrorists and encouraging the gun”. Well, Peter, when your party’s MPs , led by Nigel Dodds, shore up David Cameron’s insistence on bombing Syria, your party will have spawned the process of encouraging further barbarism in the Middle East.

Omagh is my home town. A distant cousin of mine died in the blast. Part of the horror and disgust expressed by politicians at the time came from the numbers involved – twenty-nine innocent people, including a woman pregnant with twins. Does anyone in the DUP or the UUP doubt that more than twenty-nine innocent Syrians will die from bombs which their party members will tonight help prime?

44 Responses to Unionist politicians and bombs