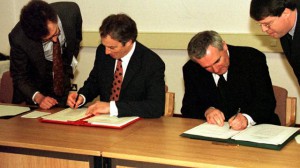 The tragedies of the past have left a deep and profoundly regrettable legacy of suffering. We must never forget those who have died or been injured, and their families. But we can best honour them through a fresh start, in which we firmly dedicate ourselves to the achievement of reconciliation, tolerance, and mutual trust, and to the protection and vindication of the human rights of all.

Noble words, but what does it really mean?

Of course a clear majority on this island voted for it, but did we ever really understand what exactly it was we were voting for?

If so, then why is Northern Ireland still seemingly ungovernable?  Why are legacy issues still not being dealt with?  Has the national identity question really been resolved?

After all, the agreement clearly sets out it will recognise the birth right of all the people of Northern Ireland to identify themselves and be accepted as Irish or British, or both, as they may so choose, and accordingly confirm that their right to hold both British and Irish citizenship is accepted by both Governments and would not be affected by any future change in the status of Northern Ireland.

But what does that mean?

Clearly it recognises the birth right of the people of Northern Ireland to be accepted as Irish or British, or even both.

Yet, Unionists read it as yes, you might entitled to be Irish but this place is British and only the flag of the union and the British identity can be officially recognised.

In light that over 500,000 northern Ireland citizens carry Irish passports and identify themselves as Irish and see the Irish flag as representing their nation, that is hardly representative of this society and how does it recognise the birth right of those with an Irish identity?

Not only that, but even a democratic compromise to fly only the union flag but on designated days only, still was not acceptable to the majority of unionists judging by the protests and graduated response that ensued.

When it comes down to it, the GFA is simply a framework for how to achieve agreement in a divided society, and an agreement that agreement must be agreed upon using the arrangements agreed, before anything can be said be have been agreed.

Confusing, yes?  Is it any wonder it is so difficult to achieve agreement?

So why is agreement so difficult?

Let’s start with the legacy issues.

“We must never forget those who have died or been injured, and their families. But we can best honour them through a fresh start, in which we firmly dedicate ourselves to the achievement of reconciliation, tolerance, and mutual trust, and to the protection and vindication of the human rights of all.”

So we go down the slow and costly route with police led investigations.  As successful as could be expected with so much time having passed but with gradually more and more evidence being dug up as the investigations touch on the handiwork of British state agents that perception is gradually changing.

Yes, we have since had apologies from prime ministers but has the true extent of the state’s involvement here really been uncovered?  Is the British state simply hiding behind national security on top of already destroying and denying access to evidence and is this living up to the governments side of the agreement, bearing in mind the two states are meant to be guarantors of the agreement?

Is it fair for a society that has suffered so much to be denied being able to move on just so the state can save face or is there really a risk to national security from putting the whole truth in the public domain?

Is it even possible to satisfactorily deal with legacy issues without the state removing restrictions on the remaining evidence and coming clean?

I have to believe the truth will come out eventually.

So what the GFA really equates to, is unionism being tolerated in the interests of reconciliation in return for safeguards that they can never again abuse the position of power that has led to so much conflict and suffering in the past and that there is a peaceful route to reunification that both governments have signed up to so there can no longer be any justification for resorting to violence to achieve Irish independence.

So where do we go from here?

What is the future for Northern Ireland?