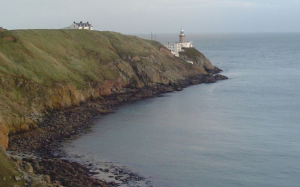 Back in the 6th century AD an Ulsterman whose name is universally venerated for kindling the flame of Christian faith, attested to the sweetness of being in Beann Eadair and in this 3rd Millennium of the Christian era, I can assure you he wasn’t lying.

His name is associated with the island of Iona and a city in the Northwestern region  of an island off the North-West of Europe whose name is suppressed in Leinster House, as Jude recorded yesterday. It still makes me grind my remaining teeth when Doire Colmcille is referred to as Londonderry.

Beann Eadair is generally called by the monosyllabic name Howth, by those misled by elocutionists. Families long established there,some from the days when the Vikings came to rape and pillage,  used two syllables – Howeth, in homage to the raiders, from whom many derived their surnames. For the Vikings/Danes, in their language, called it “Head” (HOVED). So elocutionists taught nonsense and those who say “Howth Head” are using tautology.

Colmcille’s observations are easily checked on youtube. Two particular colour features from 1959 and 1942 I find moving. One features the Hill of Howth tram which, starting at sea level, did a circuit of the  4 square-mile peninsula rising to a height of nearly 500 ft and offering vistas as far away as the Mourne Mountains to the North, and Wicklow Head to the South, and the beauties of the hill and cliffs of the peninsula itself. I travelled on it daily between 1948 and 1957 and could fill a book with stories, sacred and profane.

Every August Bank Holiday the Royal National Lifeboat Institution had a flag day and my elder sister was entrusted with a collection box by a close neighbour with no discernible interest in sea, or, indeed, water. But in July he’d be off to Belfast, as my mother would say – “To Bate The Drum.”

Anyhow my sister tired of the collecting and I went back and forth on the tram collecting from the tourists, mainly from Lancashire mills and factories, who regarded returning from holiday with a penny left in their pockets as shameful Scroogery. I also collected from house to house. Blissfully unaware that I was too young to be entrusted with collecting, that collecting door-to-door was illegal, as was pestering passengers on public transport.

The Hill of Howth tram and the North Dublin suburban trains and buses belonged to the Great Northern Railway, with headquarters in Belfast, until 1959. Our neighbour who “bate the drum” had been a clerk in the GNR and, though a pensioner as long as I could remember him, always  wore a bowler hat, black overcoat with breast pocket, and carried a silk umbrella. It wasn’t till I was working in London that I saw similarly dressed gents.

My sister can recall Orange marches in Howth, led by a farmer from whom we always bought our milk.He had seven sons, one a devout GAA man, the head and only member of Beann Eadair GFC’s Vigilance Committee, charged with enforcing the ban on members playing or watching foreign games. At least one Gaelic player, a garda named Mairtin de hhOra, from Kerry,played with Suttonians Rugby Club as Martin Hoare. You may think him a Cute Hoor.

Our house was one of two Catholic ones in a two hundred and fifty yard stretch of Balkill Rd, the other owned by the family of the Naval Service’s commanding offficer for the whole state and its territorial seas. One of the Tram Conductors followed naval, but not GNR, practice, in putting a white cover on his cap in the summer months and one might have shaved oneself with the crease of his trousers, using his shoes as mirrors. A visitor would have thought him the Naval Supremo, and the latter the Tram Conductor. To add to the confusion, the Conductor, like many of the GNR men,was a Protestant, and I imagine I was not the only one who imagined he’d served in a smart British regiment. Not at all, he’d been in the part-time Irish Volunteer Force, established by de Valera in the 1930s to engage the energies of those who might otherwise have joined the IRA, and very probably also to stymie any mischief from the regular forces which had triumphed in the Civil War. There were also on the Hill some leading Republicans, Protestants whose Republican ardour had not been mollified by Fianna Fail’s Fabian strategy and tactics.

Nearly all the stereotypes peddled, even by learned commentators, were contradicted by everyday experiences of Howth. The local parish priest was inspired to arrange for the blessing of all the fishing boats and other vessels in Howth. The local pipe band led a procession to the harbour where the boats were festooned with bunting, Benediction was said and the boats blessed. One fine day many of the boats took on passengers young and old, free, and took us for a trip around Ireland’s Eye, and along by the northern cliffs of Howth. What insurance companies and health and safety authorities would think of that I dread to think. I once saw a Greek film featuring a similar ceremony. I’ve only once been in Greek territory, Corfu on a rainy morning. Howth on a good day would knock it into a cocked hat.

What today’s begrudging anti-Catholics would make of such Papist temerity I don’t need to ask.But there was no sectarian ill-feeling in Howth.We didn’t , as a rule, visit each others’ places of worship. But our Protestant neighbours came to my mother’s Requiem Mass, and my elder brother and sister reciprocated that courtesy, at a time when Catholics were prohibited from attending a “heretical” sevice.

The other youtube film shows Howth Regatta 1942. Shot in colour it is beautiful and it has been dubbed with passages from Riverdance.

I was 7 months old when it was done. Most of the world was booming then, aerial bombing, artillery shelling, torpedo slaughter. But we in Howth were out of the World War and out of the fashion. I blame de Valera.

Incidentally you can also see a recently made youtube tour of Ireland’s Eye by a drone-mounted camera.