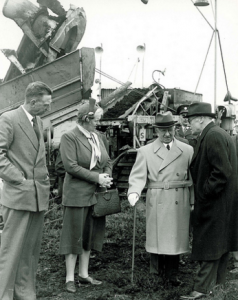 You may have heard of the Historian Fukuama and his famous book THE END OF HISTORY. I haven’t read it nor do I need to.

I’m quite happy with the ENDAHISTORY, aka THE ENDAFECKIN HISTORY, because it’s good for laughs.

You’ll remember Enda’s speech at the commemoration for Michael Collins at Beal na Blath, when the Taoiseach revealed that Lenin took a sabbatical during the Russian Revolution to consult in Ireland with Collins, our Republican Minister for Finance on the funding of revolution.

But Enda didn’t mention the sequel. It seems that, back in Moscow, Comrade Lenin reported to the Politburo –  “MIchael Collins, Man of Cork, proves Ireland can Float a Loan”  which prompted the boast of another comrade “I, Josef Stalin, Man of Steel, can Build Socialism in One Country.”

There’s an ex- Cork Man of The Year of great learnin’ and buoyancy who keeps bobbin’ up ‘n’ down with increasing crankiness as he grows older. He is Emeritus Professor of History from University College Cork.  His fear and loathing of today’s Sinn Fein has so blinded him to historical fact that he denies any connection of the 1916 Rising with Sinn Fein of that era..

The late Sean T O’Ceallaigh, President of Ireland during my youth, published two volumes of memoirs in Irish. Unfortunately I have only the one volume. It is a delightful read and I could imagine Charlie Chaplin,  Peter Sellers, or a young Dustin Hoffman playing Sean T in a filmed adaptation. Sean T was always a dapper gent and, as he was to serve as a Staff Officer during the Rising he called on his tailor, or perhaps had his tailor call on him, to order a uniform. The tailor didn’t finish the uniform in time and poor Sean T was reduced to wearing his usual elegant civilian clothes in the GPO and environs during Easter Week. This probably saved his life, or at least a sentence of death. When the GPO was evacuated he managed to slip off home and, though arrested there later, the executions were being halted. Had the Rising been crowned with military success Sean T O Ceallaigh would have been appointed President pending a General Election, as he was an  Alderman of Dublin Corporationelected on a Sinn Fein ticket. Sean T’s memoirs are in Irish, a language in which John A Murphy is far more proficient than I am.

William T Cosgrave was also a Sinn Fein Alderman on Dublin Corporation and he was sentenced to death for his part in the Rising. He was no less prominent in later public life and was President of the Executive Council of the Irish Free State in Professor Murphy’s earliest years.

The current An Phoblacht lists others prominent in the Easter Rising with Sinn Fein connections and I imagine there were many rank and file insurgents similarly connected.

If I ever start writing the sort of  balderdash that  Professor Murphy now writes please see that it is contradicted.