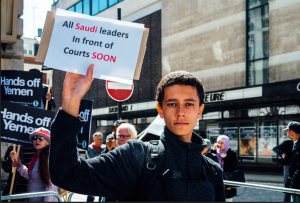 It’s odd the way stuff slips under the radar. If you said “British foreign policy”, you might think how Britain has participated in air strikes in Syria in recent months, air raids which kill innocent civilians as well as their intended target. What the intended target is appears to be itself confused – is it the rebels in Syria, is it to prop up the regime there, why is it necessary?

But at least that’s been ventilated reasonably well in the headlines. Yemen, on the other hand, gets little or no mention. It’s being assaulted by Saudi Arabia, and guess who’s providing arms and expertise to Saudi Arabia? That’s right – Britain. Your tax money and mine is being used to give military advice to Saudi Arabia as to how best destroy Yemen. In less than a year, 6,000 Yemenis have been killed, with about half of those being civilians. One hundred and thirty medical facilities – you heard me, Virginia – have been deliberately targeted. According to UN figures, more than 14 million people in Yemen are hungry, with some 7 million suffering from severe hunger. Around 1 in 10 Yemenis have been driven from their homes. And since the Tories took over in Britain about five years ago, David Cameron has arranged for £6 billion worth of arms to be sold to the Saudi Arabian dictatorship.

Do you remember Mary McArdle? She assisted in the killing of Mary Travers, the judge’s daughter, by attempting to conceal weapons used in the killing. She was imprisoned for that and later Ann Travers, Mary’s sister, succeeded in having her dismissed from her post as special adviser to Sinn Féin’s Culture Minister, Caral Ní Chuílin.

So here’s the thing. While agreeing that any taking of human life is a brutal act, which of these seems to you the more monstrous: to conceal weapons that’ve been used to kill an innocent young woman, or to sell £6 billion-worth of arms to a regime, in the full knowledge that that regime will use the weapons to help blow to pieces over 3,000 innocent civilians and bomb hospitals? Because David Cameron is guilty of the latter yet I don’t remember anyone campaigning to have him removed from his job. And did I mention that Saudi Arabia began 2016 with a mass beheading of a number of its own citizens?

George Orwell, thou should’st be living at this hour.

21 Responses to On keeping your job