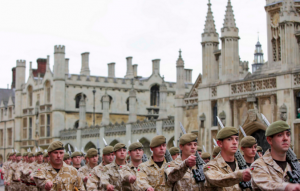 Conflict brings out the worst in people and is a terrible time for all involved.  Post conflict, it is usually the victors’ point of view that is accepted, their actions forgiven and they who do the most to vilify their old opponents, often hiding the truth of their own actions during the conflict along the way.

In post-conflict Ireland, it is disappointing that much of the one-sided vilification has come from the southern Free State and has been for selfish party political interests.  The southern state parties, in particular Fine Gael know very well that British intelligence services have operated and killed in the republic and still operate agents involved in criminality today many years after the conflict supposedly ended.

Cover-up on the grounds of national security or routine destruction of evidence does not mean it didn’t happen, and has the dropping of Articles 2 and 3 absolved all responsibility on the Irish state for over 500,000 Irish citizens living north of the border?

Perhaps if those citizens were entitled to vote in southern elections and to have a say in who represents their own country, their opinions would be afforded a little more respect.

Instead, we are treated to a prolonged media-backed campaign to vilify republicans with particular emphasis on thwarting the growing popularity of Sinn Fein, in which human rights have been abused through the unjustifiable use of special criminal courts, the deplorable propagation of lies from clandestine and perfidious sources and what can only be described as an embittered campaign of mudslinging in the hope a sufficient amount sticks to see off the upcoming elections.

Add to this the usual barrage of Orange Order marches and the annual outburst of poppy fascism where Irish who prefer not to support the British forces actions past and present are also vilified. You could be forgiven for thinking that the crime passed on to northern Gael much like that of Original Sin, is that of being Irish.

Perhaps all we can do when faced with such intolerance, is remind them of the 2 million women raped by the Allies at the end of the ww2 conflict, an average of 60 to 70 times each with tens of thousands dying from the experience, others simply being shot by British soldiers after they had their fun.  *

Or more recent events such as the Iraq historic allegations teams who are charged with investigating the allegations of ill-treatment or unlawful killing by British forces in Iraq between 2003 and 2009.**

But not to worry, when you read the last lines of this update report, you can rest assured that their crimes will be protected as fervently as those committed in Ireland and the poppy fascism will flourish in the filth upon which it grows.

Of 1,235 alleged cases of ill-treatment, including accusations of rape and torture, only 45 are under investigation.

That initial target for completion of its investigations was 2016 but this will not be met. And, although the unit is funded until 2019, its work may not be finished by then.

View all posts by Jude Collins →
Words as weapons, flags as food
Not much nutrition at Dublin Castle

19 Responses to ‘Poppies, Crime and Criminality’ by Jessica McGrann