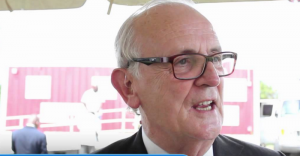 May I address the gripes of Sharon Ni Chonchur and Joe Horgan?

Ms Chonchur wants gender quotas for election candidates. Such quotas would restrict the freedom of political parties to choose those they thought the most suitable candidates and might well spoil a party’s chances in the polls. Irish parties are autonomous as are Irish voters. There is not today a glass ceiling for women in the Irish public service. The Minister of Justice, the Attorney General, the Chief Justice and the Garda Commissioner are women. Two women have held the highest office -the Presidency of Ireland.Neither is there a sectarian barrier to stop any citizen from serving in any office. Citizens who join parties and are not chosen by those parties as candidates can always stand as Independents. The Proportional Representation gives them a better chance of election than the First Past the Post system operating in Britain. The gripe is an anachronism.

Joe Horgan is rattled by the popularity of the late PJ Mara with the media. But I think he would find it hard to prove that Mara saved Charlie Haughey from being savaged, often unfairly, by those same media. Mara was highly cultured, more highly than many with more impressive academic qualifications, and very, very funny.

Horgan might be contrasted with Alastair Campbell, quite a bruising spin-doctor for New Labour, and Bernard Ingham, Thatcher’s spin-doctor who relished his thuggish reputation so much that he chose a photograph for the cover of his memoir “Shoot the Messenger” that would frighten a pack of rabid rottweilers.Then there was Harold Wilson’s man, Joe Haines, who viciously attacked Eric Heffer when the latter was dying from cancer, and was a paid sycophant for the crooked Robert Maxwell.

Horgan was a better man with language than a predecessor who boasted he’d a steel spine and “balls of iron.”  Particularly as the predecessor had the pneumatc surname DUNLOP.