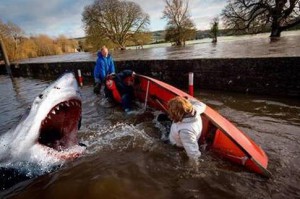 Did you cheer? I’m  afraid I did. What’s more , I resented the way RTÉ had fiddled with the editing of the event. One minute we had a shot of Joan Burton in her very own canoe going up the flooded area; then someone walked across the screen; and immediately after Joan is beginning to rise out of the water into which she has tumbled. Clearly RTÉ felt that a shot of the Tanaiste actually tumbling into the water, let alone what she may have yelled as she tumbled, was more than the  public could take. Fair play to Joan, though. She quickly turned her back on the camera as she helped the person at the front of the boat – who didn’t appear to need help –  to her feet, which gave Joan a little time to compose herself and give a clenched-teeth smile to the cameras. “I’m grand” she announced. “I’m very fast on my feet”.

But here’s the thing. If Joan had been a normal punter, would we have been tempted to cheer? I don’t think so – more likely felt sympathy. Getting your rear end suddenly soaked is not a pleasant experience, I imagine. What made Joan’s case different was, here was one of the movers and shakers, one of those we have been taught to defer to, being dunked big-time. Schadenfreude, yes, not worthy of us as sympathetic human beings, yes, but the best bit of TV on New Year’s Eve for a long time. And I’m ashamed to say I couldn’t help wondering about the logistics of J fresh dry undies being rushed to the spot to rehabilitate the Tanaiste.

But is there a pattern here? Hands up if you remember Joan’s last truly-big public moment? Right, when she was ‘imprisoned’ for several hours in her chauffeur-driven car by a group of noisy – that’s right – water charges protestors. Could the gods of water be sending Joan some sort of message about her party’s possible fate in the general election?

View all posts by Jude Collins →
Oh A P – did you have to?
MODERN TIMES

22 Responses to The perils of canoeing