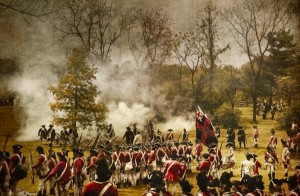 I understand that the American War of Independence succeeded because the rebels’ gallant allies from Europe had temporary command of the seas. Had the Battle of Yorktown gone the other way, George Washington would have dangled at the end of a British rope and other rebels would have shared the same fate as the Irish at Ballinamuck in 1798.

Popular support for the American rebels was not tested by universal adult suffrage or universal male suffrage. The aboriginal population, the so-called Indians, were not on electoral registers. Neither were black men or women, most of whom were the property of rebels such as Jefferson, Washington and other apostles of liberty. Indeed the first draft of the Declaration of Independence wrote of “life, liberty and the enjoyment of property”.

But, as the slave owners were appealing to the conscience of the world they thought better about being quite so frank about their objectives.

I’ve read that among white Americans a third supported Independence, a third opposed it, and a third was indifferent. When things were going bad for the rebels some leading businessmen were very ready to treat with the British.

After the British conceded defeat, the empire loyalist ‘Tories’ were not uniformly embraced as brothers by the victors or their hangers on and  many left, embittered ,for Canada.

A descendent of one of those loyalists, Hamar Greenwood, was Britain’s Chief Secretary for Ireland when Lord Mayor MacCurtain was murdered, his successor Terence MacSwiney died on hunger strike and Cork City Hall and the Carnegie Library were destroyed in Cork.

5 Responses to Thoughts on revolution, rulers and democracy by Donal Kennedy