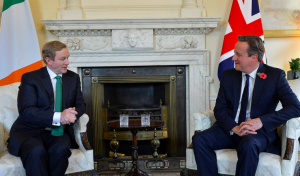 (This article first appeared in the Andersonstown News)

Enda Kenny was in Downing Street last Monday. Isn’t that exciting? He was visiting the British Prime Minister David Cameron with the focus on Britain’s relations with the EU.

“Discuss” is the word that was used to describe the  meeting. However it’s far too vigorous a word. What the meeting amounted to was more David telling Enda what he needed to do. Virginia  managed to plant a listening device in the room and we got this transcript.

Enda: So, Dave, how are you finding these EU honchos, ah? They can be tough nut-crackers, believe you me. Making much progress on getting special terms for Britain?

David:  Not so far, Kenny. There’s an EU summit on 18 and 19 February and I’ve been told in confidence by one or two of the EU people that they might cobble together a face-saver for me then. Like when the troika used to come to Dublin and write your budget but pretend you were in charge. Remember?

Enda: Mother of God, will I ever  forget. Those three feckers making an eejit of me in front of my own people, headlines every day saying I was only a puppet with a Brussels hand shoved up my you-know-what. I can tell you, Dave, they’re a bunch of bruisers, those Europeans. Can’t speak proper English but would think nothing of tearing your heart out. Especially the Germans.

David:  It is proving somewhat difficulty, Kenny. I won’t deny it.

Enda: But can we not help you at all at all, Dave? I don’t mind saying,  we in Fine Gael have always admired your Conservative Party,  modeled ourselves on the way you go to work. When you take the scalpel to your health service, you slice deep and true.  I say to my lot “That man Dave Cameron, you watch him,  he is the master”. So  I’m telling you no word of a lie when I say our whole party is on their knees prayin’ to Our Lady of Knock that you’ll come back with a good class of rabbit in the hat for impressing your people. Because if you don’t, we could well be banjaxed along with  you. Watch-towers back on the border, passports being stamped, feckin’ Syrians slipping in here ready to blow us all to Kingdom Come. Doesn’t bear thinking about. Fine Gael prayers go with you, Dave, and that’s no word of a lie.

David: You’re praying, Kenny? For God’s sake, man, I’m funneling off 10% of the budget to the Archbishop of Canterbury, to organize some heaven-storming.

Enda: Grand, grand. And I have the Cabinet on their knees reciting a decade of the rosary for you every morning.

David: Well when you get off the knees, Kenny, maybe you’d be good enough to put out a call to all those Irish people living in Britain. Most of them have a vote, so I’m depending on you to tell them they must go for a staying-in-Europe response when our referendum is held. Because it could be very close.

Enda:  Yerrah, don’t fret your head, Dave. And isn’t a bit of help the least we could do. When we were up against the wall, thanks to the mismanagement of that shower of Fianna Fail incompetents, who was it gave us that big loan?  You. The Brits. It made a massive difference, let me tell you. You did us a favour, Dave, and one sure thing: Paddy doesn’t forget a favour.

David: Pleased to hear it, Kenny. And I hope Paddy doesn’t forget to include the interest due when he’s paying back.

Enda: Oh no problem, sound as a bell, Dave. The cheque is in the post. Now – Any other way I can give you a leg up?

David: Yes, Kenny. I’d be grateful if  you’d make a public statement nearer the time of our referendum, calling on all British people living in your jurisdiction to get the finger out and  tick the ‘Stay In’ box on their postal vote.

Enda: Consider it done, Dave. And would you like me to put in a good word  personally with the EU honchos myself, to make sure they give you a  credible class of face-saver to bring back home?

David: Well now Kenny, I don’t mean to be rude. But didn’t the European Central Bank and the troika kick your Irish arse up and down O’Connell Street until you did what you were told?

David: I’m a blunt man, Kenny, so let me spell it out.  I don’t think the EU head honchos give a tuppenny damn what you say or advise them. In fact, you’d maybe better avoid saying anything You might only provoke them and we’d be the ones would suffer.

Enda:  Well you’re the boss, Dave. You know I just want to be supportive. As I say, myself and my party  have always admired you and we’ll be modeling ourselves on you in this feckin’ election we’re facing in February. Please God we’ll get a similar result to yours.

David: You have my sincere best wishes…(Looks at watch). Oops – your ten minutes are up, I’m afraid, Kenny. Don’t forget what I said – be sure to get the paddies in Britain on board, and the Brits in your own country as well.

Enda: Consider it done, Dave. And on a personal note, could I thank you for allowing a simple primary school teacher from Mayo to walk in here to the grandeur of No 10 and sit here yarning with you. I want you to know, I feel honoured, Dave. Privileged.

Enda: And I’m honoured to see you.  No word of a lie… Although there is one thing. I know it’s a  minor detail but… my name’s not Kenny.

Enda: Well I am, I’m a Kenny all right, but that’s the old surname, don’t you know. My first name is Enda.

David:  Really? How odd. Edna Kenny. Sounds like a husband-and-wife team. Anyway, cheers, Edna. And don’t forget what I told you to do.

Enda: Ah sure hold your tongue, what else would I  be doing?  You’re an inspiration to all of us in Fine Gael, Mr Prime Minister.

David: Well thank you, and good luck with your election, Edna. Mind the step …No, no, that’s all right officer – he’s not drunk, no need to arrest him. He’s with me.