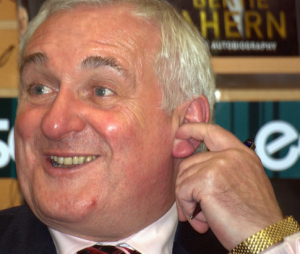 The Irish are a forgiving people; they’re also a credulous people. Five years ago, you could never have foreseen the situation we have today. And yes, I am talking about you, Fianna Fail.

In the final days of the Fianna Fail /Greens coalition, the very words ‘Fianna Fail’ stirred up feelings so strong among the Irish electorate, it’s surprising a mob didn’t seek out the Fianna Fail headquarters and torch it. Cabinet ministers retired and headed home, clutching their fat pension portfolios. The Fianna Fail candidates in the General Election must have wished they could call themselves the Republican Party or something equally unlikely – anything but the toxic name they were stuck with. The results of the 2011 General Election showed Fianna Fail dropping like a stone from 57 seats to 20 – the biggest loss of its kind in the history of Western Europe. There was considerable talk of this being the end of Fianna Fail.

But lo! Today, if we’re to believe Ivan Yates, the former Fine Gael TD, bookie and bankrupt, Fianna Fail should take 39 seats. He prophesies 51 seats for Fine Gael and 29 for Sinn Féin. The great majority of commentators (I disagree with them) declared Micheál Martin the outstanding debater in the various Leaders’ Debates. The man who epitomized everything shady and dubious about Fianna Fail, Bertie Ahern – the man who was Taoiseach but had no bank account, the man who received “a dig-out” from friends without requesting it or responding to it with political favours – he has been moving gently into the public limelight again and no one has started throwing stones. Astonishing. None of the many commentators was or is able to explain this phoenix-like rise of Fianna Fail. Either the people of the south have soft hearts or thick heads.

So would you buy a used car from Bertie? No? Well, how about a prophecy? Bertie  is in the Indo today, declaring that Sinn Féin will register 10 fewer seats in Dail Eireann because they were led by Gerry Adams and not Pearse Doherty or Mary Lou McDonald.

I’m not asking you if you agree or disagree. I’m asking you to remember, when the final tally for Sinn Féin comes in, you should add 10 seats. Then ask yourself if Bertie’s claim about Gerry seems credible.

And my own prediction? Forget it. I have no idea, other than that Fianna Fail will do better than they deserve to, and the same goes for Fine Gael. The Labour Party I’ll simply avert my eyes from and murmur a quiet prayer for. Sinn Féin? The chances that they’ll increase their number of seats is very high. But do remember to add on that extra 10 to their total – after all, it was Bertie who told us. And while you mightn’t buy a used car from him, you wouldn’t accuse him of trying to influence the outcome of an election, would you? But whatever you do, if you’re living in the south, pull on your boots and get down there and VOTE. If you don’t, you’ll have helped create a Dail stuffed with people  you may well detest.