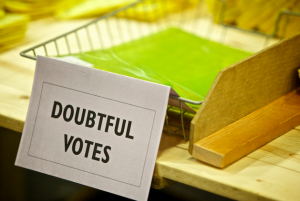 OK, think positive. As the appalling sight of Fianna Fail making a full recovery looms, and that party and Fine Gael face the ghastly prospect of having to dance with each other, let’s consider a few random points on elections in general and the south’s in particular.

Final point: As Gene Kerrigan, perhaps the best columnist in Ireland, indicated in his Sindo column last Sunday, the big fear that southern voters have with Sinn Féin is not that Mary Lou will suddenly produce an AK47, but that Sinn Féin will allow itself to be sucked into the old, tired way of doing politics in the south.

Final final point: anyone who didn’t bother to vote deserves all the pain they got.  You could have influenced how you’re governed and you didn’t bother taking the opportunity. Blame yourself for the government you got landed with.

And now I’m off to Greencastle in County Tyrone to take part in a 5-mile protest run. They’re objecting to the fact that a Canadian mining company is planning to dig for gold in one of the most picturesque spots in the Sperrins and in the teeth of objections from local people, who don’t fancy their countryside being raped and toxins drained into their water.

View all posts by Jude Collins →
The election: who won and who lost?
‘The “death-threat” to Regina Doherty’ by Daniel Collins

30 Responses to Thoughts on elections