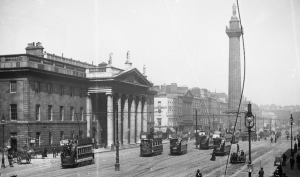 The story of how two seamen, one from Sweden and the other from Finland, appeared at the GPO on Easter Monday, 24th April, 1916, and remained there though the fighting, British bombardment and subsequent surrender has fascinated me since I first learned of it in the witness statement of Liam Tannam to the Bureau of Military History. It is believed that both men worked as sailors on a Russian merchant ship docking in Belfast the weeks before the Easter Rising. When they heard news of the outbreak of a revolt in Ireland, they travelled to Dublin to support the fight against British imperialism. This unique story continues to be one of the most remarkable and intriguing of the revolutionary period.

After the seizing of the GPO on Easter Monday, 24th April 1916, James Connolly stood in the GPO hall and issued a command in his deep Scottish accent, “smash those windows, and fortify them, and barricade the doors.” Volunteer Captain, Liam Tannam was in charge of the ground floor windows. He carefully observed his men carry out Connolly’s orders as the GPO was bustling with energy and excitement. In the GPO false alarms were being shouted by the Volunteers. “Here come the military” or “here’s the soldiers.” Windows were reinforced with sacks, sandbags, boards, typewriters and office materials – anything the Volunteers could get their hands on. Apprehension filled the air as an imminent assault by the British was eagerly anticipated. Any moment the onslaught would begin.

Around mid afternoon, the Recce Platoon of the British Lancers, led by Colonel Hammond, with their shiny brass and leather uniforms, came trotting down Sackville Street to carry out a reconnaissance of the area. “Disturbances” in the vicinity had been reported to the military. In the GPO the order “stand to” resulted in all the Volunteers moving into position, training their sights on the unsuspecting Lancers on horseback, as they cautiously approached. Whispers and rifle bolts being pulled back was all that broke the silence. James Connolly ordered that no one shoot until the Lancers had passed in front of the rebel position. One of the Kimmage men, standing on the roof of the GPO, ignited his homemade bomb with the intention of flinging it amongst the troops. The bomb exploded prematurely, seriously injuring him. With the sounds of the explosion and the cry’s of pain, the Volunteers began to fire wildly at the Lancers. Mayhem ensued. Four Lancers fell from their mounts. Three of them were killed outright before they even hit the ground and a couple of others wounded. One of the horses fell to death outside the GPO. As the Lancers retreated, a sense of euphoria and jubilation echoed around the GPO.

As the Volunteers, now filled with adrenaline, returned to continue fortifying their position, one of Tannam’s men summoned him to the barricade windows of the GPO. The sight of “strange looking individuals” outside, wearing seamen’s clothes was causing concern amongst the Volunteers. Intrigued, Tannam proceeded to the window where he “saw two obviously foreign men. Judging by the appearance of their faces I took them to be seamen. I asked what they wanted. The smaller of the two men spoke.”

He said, “I am from Sweden, my friend from Finland. We want to fight. May we come in?”

Concerned, Tannam extended his inquisitive nature and asked “why a Swede and a Finn would want to fight against the British and how he had arrived?”

In broken English, the Swede responded by saying he “had come in on a ship, they were part of a crew, that his friend, the Finn, had no English and that he would explain.”

Tannam continued “Tell me why you want to come in here and fight against England?”

Captivated, Tannam asked “Can you fight? Do you know how to use a weapon?” The Swede responsed “I can use a rifle. My friend no. He can use what you shoot fowl with.”

Within minutes the Swede and the Finn were admitted into the GPO garrison where they were to remain for the rest of the Rising. They were due to ship out on Thursday although this didn’t happen. According to Max Caulfield, Connolly had given the order to bring them in, “tell them they are welcome.” On arrival the Swede was presented with a rifle and the Finn, a shotgun. They now came under the command of Tannam and were instructed to remain at the windows at the front of the GPO. Volunteer, Charles Donnelly was amazed to see the two men join the garrison. He was keen to know why both men were so eager to become involved. The Swede told him that, “they wanted to fight for small nationalities.”

It wasn’t long before the Finn’s popularity came into question. Not long after acquiring his weapon, an alarm was raised. A potential attack awaited as the Volunteers took position and cocked their weapons. After a tense period the order came for the Volunteers to “stand down.” The Finn stepped back from the window and his shotgun fell and banged off the floor, discharging the weapon. As shocked Volunteers looked on, the blast hit the ceiling and sent a shower of plaster raining down on his comrades. Volunteer Charles Donnelly stated the shotgun blast actually wounded Volunteer, James Kenny in the foot. The bullet had ricocheted and blew off his heal. Kenny, astonished, looked down as a pool of blood adorned the marble floor. Later in the week, Kenny was to lie on a mattress beside Connolly, after the later’s ankle was shattered by British sniper fire.

Joseph Plunkett, one of the leaders of the Rising, unimpressed and infuriated approached the Finn shouting that “the man was a danger.” In his face, Plunkett demanded to know what was going on. The Finn stood and stared at him as the situation was explained. Pointing to him, Plunkett said, “we will have to get him another place out at the back of the main hall.” For the rest of Easter Week the Finn was assigned to a back room where he was not allowed to use weapons. At the insistence of the Swede, he followed his friend, “Where he go, I go. We together.” Both men spent the week filling fruit tins with explosives and pieces of metal.

In the aftermath of the Rising, the Finn was arrested and detained in Kilmainham Gaol with many of the other Volunteers. Although he was not Catholic and unable to speak English, Tannam claimed that the Finn was able to recite the Rosary in Irish before he left. The Finnish sailor, who according to Tannam was called “Tony Makapaltis” was transferred on 3rd May 1916 to Knutsford Prison in Cheshire, England. His release date was listed as 2nd June. The Swede on the other hand was slightly more fortunate. According to Tannam, the Swedish Consul intervened on his behalf and succeeded in getting the Swede home after the Rising. His name was never recorded. Having did their bit for Irish freedom, both men departed Irish History as quickly as they entered it, never to be heard off again.

In constructing and writing the Proclamation, no one envisaged that Nordic revolutionaries, a Swede and a Finn, would become the “gallant allies” who were willing to take up arms to fight against British imperialism and to defend the newly proclaimed Irish Republic.

View all posts by Jude Collins →
Suggestions?
The death of Arlene Arkinson: why are the police withholding information?