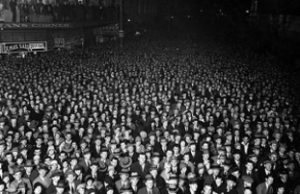 As I write, RTÉ radio is hauling in old hands to tell us how to understand the exit polls. We’ve had Billy Kelleher, the mastermind of FF’s campaign; Michael McDowell of the late PDs; and Róisín Shortall of the Social Democrats.  As yet no Shinners.

The party that will be most pleased and at the same time most agonised is Fianna Fail. They have a choice: they either enter a coalition, tight or loose, with Fine Gael, and so allow a government to be formed; or they refuse to enter a coalition with their political Siamese twin, in which case there won’t be a government and the parties will have to head back to the electorate and another election.  Which will it be?

OK, let me go out on a limb: it won’t be the second. The  three-week election we’ve just experienced was for the most part deadly dull. The most memorable images are of the Concerned Citizen/CEO getting all hot and bothered about what Sinn  Féin were about to do to the poor, and Gerry Adams drawing the picture of the three amigos on their donkeys heading for the sunset. So the electorate would be very cheesed off if they were asked to do all this again within a few months.

If that’s the case, then Fianna Fail will have to go into a coalition of some sort with Fine Gael. Nice, from the point of view that they’ll get a good big slice of the  power cake. Far from nice in that it’ll leave Sinn Féin as the major opposition party, one on which it will build.  Not just that but junior partners in coalitions tend to get it in the neck when an election comes (isn’t that right, Joan?) So as I say Fianna Fail will be breaking out the bubbly or sitting morosely in the corner swallowing whiskey, depending on what way they look at it.

Fine Gael will be fit to be tied. They were getting 30% and even more in the early opinion polls. Now here they are stuck at barely 26%. Stand by, when the time is right, for a heave against the Mayo primary school teacher.

Sinn Féin will be largely pleased and a little bit cheesed off. They’ll be happy that it looks as though they may get around double their present representation. By any standards that’s not bad. Even better, thanks to Fianna Fail’s sticky position, there’s a good chance that it’ll be seen as the major opposition party, with its main political enemy attached to a government that, in present uncertain times, will have its hands more than full. The Shinners will be a bit cheesed off because while 16% isn’t bad, it’s 4% less than they were getting in opinion polls earlier in the campaign. And if you were to go a bit mad, you could buy Bertie Ahern’s claim that SF would have added another ten seats if they’d dumped Gerry and had Mary Lou or Pearse Doherty or some such as leader. Mind you, I don’t think too many in the Sinn Féin party are so mad as to believe something Bertie Ahern says.

By my mathematics, then, and assuming the exit polls are accurate, Sinn Féin will be the happiest of the main parties.

News flash: I’m now listening to Michael McDowell giving his opinion of Sinn Féin. He’s pointed out – as I have – that SF were doing better in opinion polls earlier in the campaign. After that he seemed to lose interest, other than to say the leaders of Sinn Féin, Fine Gael and Labour should think about whether they should stand aside. Mmm. Can’t see Sinn Féin following advice on anything from a fan like Michael McDowell.

It’s going to be a long day or two.

20 Responses to The election: who won and who lost?