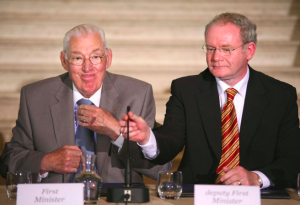 Alex Kane, the unionist commentator, had an interesting article in the News Letter yesterday. In it, he aimed both barrels at Prof John Brewer of QUB and pulled the trigger.

I have sympathy with both men. You can see why Prof Brewer might want to accentuate the positive. You can also see that Alex is right to point up the differences between communities and political parties here. It would as he suggests be Pollyanna-ish in the extreme to not do so. People and politicians here are passionately attached to their points of view, and those points of view are often diametrically opposed.

Where I diverge from Alex is in his both-sides-detest-each-other line. Like it or lump it, there is no doubt that Sinn Féin and to a lesser extent the SDLP have worked hard at mending bridges, reaching out to traditional enemies, working for a better tomorrow. Anyone looking at the last ten or fifteen years cannot but see that: the invitation of unionist politicians to take part in discussion panels (I would have been chairing one such in Derry last night, had it not been called off because of the Buncrana horror). Martin McGuinness meeting and shaking hands with the queen. Gerry Adams meeting and shaking hands with Prince Charles. McGuinness’s insistence that were Sinn Féin to become the largest party after the May elections, his first act would be to establish two First Ministers, rather than one First Minister and one Deputy First Minister. And so it goes.

What response has there been on the unionist side to this? Nothing you would notice. Arlene Foster is the only DUP politician who has been filmed shaking hands with Martin McGuinness, but that’s been swiftly balanced by putting as much physical distance as possible between herself and McGuinness on their joint missions abroad. And I’ll try not to think of Nelson McCausland or the anti-republican stance of so many southern politicians.

It’s good that people should work for reconciliation and the binding of past wounds.  But it’s imperative that journalists present things as they are rather than how they’d like them to be. And yes, that applies to Prof Brewster in his call for ‘peace journalism’; it also applies to Alex Kane in his too-simplistic one-side-loathes-as-heartly-as-the-other conclusion.

39 Responses to Alex Kane, John Brewer and telling it like it is