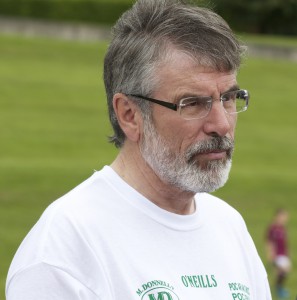 As the world and its big sister know by now, Gerry Adams was refused entry to the White House over St Patrick’s Day. He waited for over an hour to see if whatever impediment was blocking him could be removed, then left when it wasn’t. He later said he considered his being barred unacceptable and that Sinn Féin were not going to “sit at the back of the bus for anyone”.

See what happened there? Those in the White House in charge of admissions turned away the President of the biggest political party in Ireland and the media tell us that Mr Adams is the one who’s embarrassed. EH? I’d have thought the White House staff or security service or whoever was responsible for the cock-up would be the ones embarrassed. As for Dara Calleary’s “absurd” comment about Gerry Adams comparing himself to Rosa Parks – he didn’t. The parallel he drew was between Sinn Féin and Rosa Parks. Just like Rosa Parks and others campaigning for civil rights in the US were attacked and sometimes killed, so too Sinn Féin party members (including Mr Adams) were attacked and sometimes killed by loyalist and state forces. The comparison seems reasonable enough, and of course the “back of the bus” comment is one which Mr Adams and other republicans have used several times in the past.

Fast forward to the last couple of days. I was on BBC Raidio Uladh/Radio Ulster, discussing the possible renaming of Windsor Park. (No, not “Parks”, Virginia, “Park” – do try to keep up.) When I made reference to the fact that both Linfield and the Northern Ireland football team have been associated with sectarian threats, chanting and violence, I was met with a barrage of callers who declared I had sectarianized the whole issue disgracefully, that what I had mentioned had nothing to do with the new stadium’s name – which, they declared firmly, would remain Windsor Park.

It’s a neat trick and similar to the Adams story. Someone mentions an instance of injustice or discrimination or sectarianism, be that back-of-the-bus treatment or the documented history of bigotry linked to a football stadium, and the person who mentions this then themselves become the object of scornful criticism.

But, but, you say. To point out discrimination or sectarianism doesn’t make you a bigot or sectarian – on the contrary, you’re being critical of discrimination and sectarianism, aren’t you?  Ah yes. That’s true. But there are probably people who believe that for a doctor to treat a broken leg means that the medical person believes in breaking legs, and those who believe that a dentist who shows you a chart of your teeth decay is a dentist who is in favour of teeth decay.

Mad? You bet. Much of it about? You betcha.

62 Responses to How to discredit someone who criticises (that’s you, Gerry Adams)