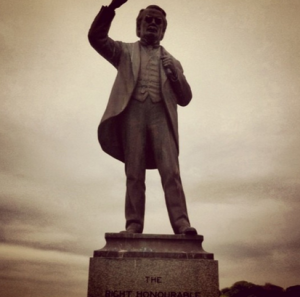 During the conscription crisis of 1918 a pamphlet “A GRAMMAR OF ANARCHY” was published in Dublin. It took its title from a comment by UK Prime Minister Herbert Asquith of October 5th 1912  on the  recent Unionist rally in the grounds of  Blenheim Palace and was published when Lloyd George was leading a coalition government containing many of the speakers at that Unionist Rally.

Asquith said- “The reckless rodomantade at Blenheim in the early summer, as developed and amplified in this Ulster campaign, furnishes for the future a complete grammar of anarchy.”

The content of the pamphlet was made up of  solely of quotations from Sir Edward Carson, Mr F.E. Smith, Mr Bonar Law,Mr Walter Long,Mr Austen Chamberlain and other Unionist MPS, Lord Robert Cecil, Lord Willoughby de Broke, Lord Londonderry,Lord Charles Beresford,  Lord Alington, some generals, colonels and majors, Editorial comment from THE MORNING POST, THE PALL MALL GAZETTE, THE TIMES, a Protestant Bishop of Down and Conor, the ProtestantBishop of Derry and Raphoe, Dr Chadwick and other Protestant divines.All the quotations were from the years 1910-1914.

It was compiled by the Nationalist MP J.J.Horgan and its first issue was  passed  by the British censor, Major Bryan Cooper in August 1918. Horgan was one of 6 Nationalist MPs returned in Ireland in the December 1918 Election when Sinn Fein took 73 seats and buried his party in a landslide.

The pamphlet’s second issue in 1919 was banned by the British Government. So the publicly spoken words of Government Ministers, legal officers and judges were banned by those who had uttered them.

But the Pamphlet was reprinted in 2006 by “A Belfast Magazine” with an introduction by Brendan Clifford and is available from Athol Books. I would recommend it to anyone who’d like to arrive at informed opinions on  the twentieth century in these islands.

3 Responses to IN THEIR OWN WORDS: UNIONIST LEADERS 1910-1914 by Donal Kennedy