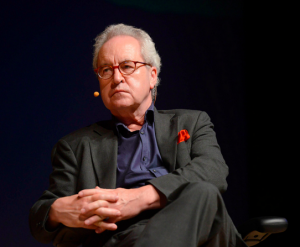 I may of course be mistaken but it has long been my conviction that the Man-Booker Prize-winning author John Banville is a twenty-four carat turd.

It started with a stupidly boastful  piece by him in THE IRISH TIMES one Good Friday. It concerned a failed attempt by the would-be hero to upset fellow-citizens on their way to Good Friday services in his native Wexford. Together with some other posers the youthful  Banville organised a meat-eating demonstration as the faithful went about their devotions.

Heaven knows most of us got up to all sorts of silliness in our youth before the ubiquity of cameras destroyed all hopes of privacy. For my own part I’m glad there were no cameras.But Banville, and the IRISH TIMES, God help them, thought they were being interesting, amusing or brave in rehashing his stupid stunt. Now if Banville had paraded down the Shankill Road wearing a Pioneer Pin, a Fainne and an Easter Lily, singing the Bold Fenian Men, I might think him a simple poor gobshite,  but a very brave one, and would pray for the repose of his soul.

Besides revealing himself as an adolescent who never grew up, Banville, born 1945, presumed to pass judgement on the Ireland, spared, by de Valera’s statesmanship, from the mass slaughter of the Second World.  As Banville perceived it, Ireland was

“a demilitarised totalitarian state in which the lives of citizens were to be controlled not by a system of coercive force and secret policing,but by a kind of applied spiritual paralysis maintained by an unofficial federation between the Catholic clergy, the Judiciary and the civil service. Essential to this enterprise in social engineering was the policy of intellectual isolationism which de Valera imposed on the country……as far as the de Valeran state is concerned, there are no adults.”

Mr Banville has written a play imagining a meeting in Dublin in the 1940s, during the Second World War, between the poet John Betjeman who was attached to the British Legation in Dublin and the West Cork “Ascendancy” writer Elizabeth Bowen. Betjeman, certainly an intelligent man and probably an intelligence agent, explains to Bowen that de Valera would not allow the British to have an embassy in Dublin.

I believe that Australia would not accept the accreditation of an Irish Ambassador until about 1950, for I read about it in the papers at the time. I was aged 8 or 9 and I’m tempted to think I was nearer to adulthood than Mr Banville has yet got.

I heard only a snippet of the play on the car radio and when I said what I thought of its author my wife turned it off. So please hear me loud and clear when I repeat that I consider John Banville a twenty-four carat turd.

View all posts by Jude Collins →
Alex Kane, John Brewer and telling it like it is
Reimagining Ireland: thinking out loud at Queen’s yesterday