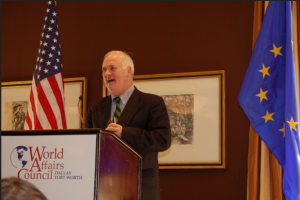 I’ve never thought of John Bruton as a dangerous truth-teller, but this morning I do. Well, a partial truth-teller. By now you’ve probably guessed what he’s telling truths or half-truths about: the Easter Rising.

He says several things about the Easter Rising, notably that Ireland could have achieved independence without violence: “The same principle of legislative independence, conceded to Ireland in September 1914, was conceded to Canada, Australia and other dominions. We know now that they all proceeded to full sovereignty, without the suffering and bitterness of war.”

But where I think he becomes a dangerous truth-teller is that he looks at the Easter Rising alongside the Troubles in the north.

“People are saying ‘Well, it is not justified to use the gun now – but we are going to justify its being used the past”.

That link between the violence of 1916 and the violence of the Troubles is something which all the parties in the south, excluding Sinn Féin, have refused to even mention. So well done, John. Unfortunately, John doesn’t go on to reveal in what circumstances “the gun” is justified. In fact he appears to adopt a pacifist stance, which he’s entitled to do and for which I could even applaud him. Though I’m wondering why I didn’t hear about John the Pacifist during his years in public office.

That there is a link between the violence of the Easter Rising and the violence of the Troubles should be obvious. The aims and methods of republicans in both eras are very similar: to establish by force an Ireland free of British intervention and which promotes equality– “Equal rights and equal opportunities for all its citizens”. Easter 1916 resulted in a southern state which was largely free of British intervention but which was and is a long way from equality among citizens. The Troubles resulted in a northern state which is no longer an obscenely unjust Orange state where gerrymander and discrimination thrived. It remains a state under British jurisdiction  but has made considerable progress towards national sovereignty through the Good Friday Agreement, which promises national unity when north and south express a desire for it.

Which brings us to the thorny issue of what are called ‘dissident republicans’ – those who believe that violence continues to be the only way in which Irish unity and an end to British intervention can be achieved. Bruton is right when he says that these ‘dissident’ republicans can point to the Easter Rising as the source of their inspiration and methods. What he omits to say is that the so-called dissidents are playing straight into the hands of those who believe in the union with Britain. As Martin McGuinness, ever the pragmatist, has pointed out, these people are useless militarily, they are riddled with state agents, and their violence would destroy the equality achieved within the state by republicans and others.

I have nothing but respect for those who are consistent pacifists. It would have been interesting to observe the political career of a life-long-pacifist John Bruton. I have a degree of understanding but little or no respect for present-day ‘dissident’ republicans, who think continued violence today will lead to a better tomorrow.

49 Responses to John Bruton and “the gun”