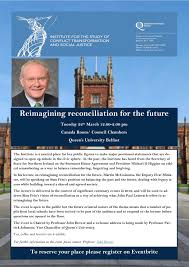 I attended a tw-hour discussion in Queen’s University yesterday. It was part of the ‘Reimagining Ireland’ series which Dr Francis Teeney of Queen’s has been organizing on his blogsite Political Mindfields. It was interesting for a number of reasons.

The keynote speaker was Martin McGuinness, the Deputy First Minister. He was a bit frazzled, I suspect, having been on the east and the west coasts of the US over the Paddy’s Day period, and then had come home to Derry to find himself responding to the appalling deaths of five Derry people in Buncrana. But as always, at least in my experience, his performance was masterly. He spoke about  being invited to other countries like Sri Lanka and Colombia to talk about how we’d handled our peace process. He spoke about his reasons for joining the IRA (all involved the deaths of people in his own part of Derry). And he spoke about what he believed politicians here must do.

There was a panel of six or so young people from local grammar schools – Catholic and Protestant – who each talked for four minutes and then posed questions, along with people from the floor, to the DFM. They were all impressive – at their age I’d have swallowed my tongue if asked to speak on such an occasion, or address questions to one of the two people effectively running this state.

What did they talk about? The need for new parties, so we’d get past what they saw as the arid green-and-orange domination of political questions. They spoke about the pressing need for gay marriage legislation. They spoke about integrated education. And one of them – probably the most articulate – spoke about the Troubles, and how the conflict had come into being because of the paramilitaries (that is, the IRA) and that it ended when the IRA stopped their blood-letting. (That description doesn’t do his contribution justice: he was clearly an intelligent young man and had strong convictions, eloquently stated).

So was the event worthwhile? It was indeed. It made real the need to involve young people in politics, to get them active and thinking about the society they live in and what would best serve its development. It impressed on me yet again what a capable public speaker the DFM is, and how he manages to speak confidently about his IRA past without either apologizing for it or antagonizing those who have strong contrary views. He picked up on the need for a new party notion and said while desirable, he didn’t see it happening here. What was needed, he said, was reconciliation between unionist and nationalist/republican parties, both working together for the common good and for the healing of old wounds.

The saddest part for me was the fact that the most articulate of the young people appeared to see the Troubles in  a blinkered way – effectively, it was all the fault of the ‘RA. I’ve encountered a similar mindset from a meeting a couple of years ago with some young Ulster Unionists: they were polite, they were bright, and their thinking about the Troubles and the present situation was straight from…1960 approximately. As long as unionists and especially young unionists (and, I’m sure, a considerable number of nationalists) see the period of conflict in these one-eyed terms, there seems little possibility that the kind of reconciliation called for will be other than one-sided.

Oh, and finally. I was lucky enough to be sitting beside a man from Dublin. At the end of the event he told me he’d come up especially for this occasion because he was  interested in the development of politics north and south. He told me that among his friends and even family, he tended to avoid political discussion because it was virtually impossible. He said it had much in common with the views of the bright young man with the narrow vision. All this, he said, he found depressing. For me, though, our conversation was encouraging. It illustrated once again that there are people in the south who can see beyond the constant anti-republican rants from the Indo, people who are truly nationalist and are as concerned over what is happening in the north-east of their country as they are in the south of the country.

The Deputy First Minister praised the contributions of the young people. As I say, I admired them too. But had it not been for my conversation with the man beside me, I would have left in a gloomy mood. Almost all of the young people didn’t address the big issue that divides us – rule from Britain – and the one who did saw the past and the present with tunnel vision. Which goes to show you: maybe our education system isn’t all it’s cracked up to be.

81 Responses to Reimagining Ireland: thinking out loud at Queen’s yesterday