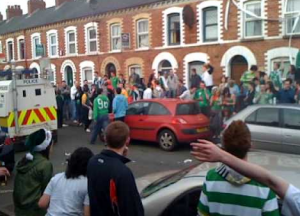 1. If I lived in the Holylands area and was subject to that level of noise and disturbance,  it would drive me to some desperate act.  Noise pollution is not a good thing and shouldn’t be allowed.

2. There are some people who forget what it was like to be twenty. That’s when you drink too much, see larking around as a rather wonderful thing, and the odd bit of anti-social behaviour as a juicy bonus. If you can’t be irresponsible at twenty, when can you be?

3. For young people, the Holylands is a real draw. The students could walk to the city centre and join in the carnival there but they choose to stay in the Holylands and celebrate. And they’re joined by lots of others who don’t live in the Holylands. One young woman interviewed on radio said something like “The Holylands – it’s the best place in Ireland to be on St Patricks’s Day!”  What is it that the Holylands offers? It can’t simply be put down to delight in destruction and depravity.

4. Unionist politicians appear to be out of the blocks very quick on this one. Is there a possibility that they’re heaving a sigh of relief, that they’ve located something that might make themuns look as bad as usuns do on the Eleventh Night? Perish the thought.

5. Is there any possibility that the universities and the police would work to establish contact and engage in discussion with the students starting, say, in September, so that by the time 17 March rolls round, they’ll have developed decent personal relationships with the young people and even some code of conduct that will allow the young people to let off steam while allowing the residents to get a decent night’s sleep and their cars un-jumped-on?

6. Don’t shake your head and say “Young people today!  When I was their age…”  Slice off your tongue and eat it instead.

View all posts by Jude Collins →
RUMOURS OF WARS by Donal Kennedy
The Rumour Mill: could Simon Heffer be going to the Sindo?