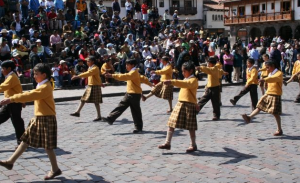 Much has been made of the recent clash between members of a loyalist band or its supporters with members of the PSNI. Two policemen in the Ormeau area were injured,  but the thing that got headline news was the claim that several children had been hurt with pepper spray, presumably fired by the police.

No doubt the truth of what happened will eventually emerge (OK, maybe not); but a more interesting question is: what were the children doing there? Either they were part of the band or they were closely associated with it. Which brings to mind unionist cries of ‘Child abuse!’ just three years ago, when there were claims that children were dressed in paramilitary style as part of a ‘dissident’ republican march.

So should we condemn this induction of children into the loyalties and affinities of adults? I remember at one point interviewing Chris McGimpsey, a man I’ve always liked and even admired. In the course of the interview he mentioned the induction of his son into the Orange Order and how proud it made him feel. I was genuinely shocked  – it did seem at best the manipulation of helpless children’s hearts and minds.

That was over twenty years ago. I’m not so sure anymore. If that is child abuse, then virtually every society on earth is guilty of child abuse. Americans teach children to pledge allegiance to the flag. English children are taught to respect British values. Children attending Catholic schools are encouraged to retain the Catholic faith. Likewise Muslim schools, Boy Scouts, Girl Guides – every society has values and practices that it strongly believes should be handed on. Even live-and-let-live liberals are keen that their children adopt a live-and-let-live philosophy.

So it’s not really the involvement of children at loyalist band parades or republican commemorations that is the problem. It’d be an odd parent who didn’t want their children to share their world view. The point at issue is the content of what is being passed on. If it’s bigotry and hatred of others who don’t share your thinking, the implanting of such thinking in the minds of young children might indeed be declared corruption or abuse. If on the other hand it involves the passing on of sincerely-held and positive values, then it’s both inevitable and desirable.

The thing is, which of the groups and organisations in our society feed contempt and triumphalism, and which promote respect and justice? Discuss.

18 Responses to Teach your children well