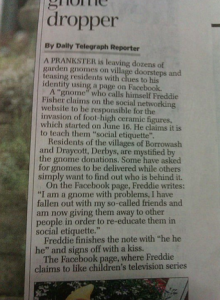 An English friend of mine once told me that the DAILY TELEGRAPH was the house journal of British Intelligence. He is both extremely intelligent and a habitual joker.But he kept a straight face long enough to persuade me that he wasn’t taking the whatsit.

But I suspected he was mistaken. I remember one of the paper’s regular columnists explaining why the American Government evacuated its forces from Vietnam. The secret was that Americans at home could see the horrors of the war on their televisions and withdrew support from their government. But the sly government in Hanoi didn’t televise the war for the Vietnamese people, who were thus kept in the dark about its horrors.
Then there was the general  writing in its columns during the war in the Malvinas, writing of “the Anglo-Saxon courage” of the Gurkhas, and, I think, of the Highlanders, in that conflict.
Recently Charles Moore, the paper’s Editor has been rehashing an ill-informed outburst from the Cardinal Archbishop of New York which confirms my suspicion that having “Daily Telegraph” and “Intelligence” in the same sentence stretches  the bounds of credulity.