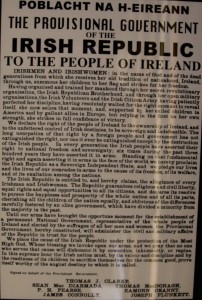 So – did you enjoy the day? It was a big thing in Belfast but an even bigger thing in Dublin, judging by the RTÉ coverage. Virtually every member of the state’s armed forces was involved in parading O’Connell Street or flying overhead or trundling past in tanks. The crowds watching on a chilly day looked enormous – the biggest there’s been in the state’s history, someone suggested. And it was more ‘nuanced’ than that in 1966 (I think that means they had the British Ambassador lay a wreath). All in all it was a good show.

But a show with a hole in the middle. Had you been a Martian watching, or even someone from a country which knows nothing of Ireland’s political situation, you might have assumed that this was a country which had achieved the goals set for it in the Easter Proclamation.

For example, the right of the people of Ireland to the ownership of Ireland. Look at the high street of any town in Ireland and you’ll be hard put to distinguish it from the high street of any town in Britain: Boots, M & S, Tesco Express, Body Shop. How that squares with the Irish people owning Ireland I’m not sure. And of course there’s tax-paying (but not too much) Google and Facebook and Apple, whose presence the Irish people have been taught to applaud. But you’d never have guessed there was some question mark over who owned Ireland by listening to any of the speeches.

As to cherishing all the children of the nation equally: tell that to families stuck in a single hotel room because their home has been repossessed; or to people lying on trolleys in hospital corridors, while those with money are spirited upstairs to a soothing en suite room with TV and armchairs and quiet. Or to Dublin’s many beggars, crouched with bowed heads and paper cups.

And did I mention that the state’s debt is such that every man, woman and child owes some €16,000?

Clearly the parades of gratitude to the brave men and women of 1916 suggest that what they died for in 1916 has been realized a hundred years later. In their hearts, every parading soldier in Dublin yesterday knows how far short of the Proclamation the state has fallen. If anything, it is running counter to the ideals stated there. But for God’s sake don’t mention that, speak not of  rural or urban poverty,   or bank debt that ordinary citizens must shoulder,  or homeless people dying within a hundred yards of the Dail…And the list goes on.

Did I say one black hole? Make that a colander. And the biggest hole in the colander was and is the thing that no one must mention and no one did mention or even hint at: the fact that the six north-eastern counties of the country called Ireland remain under British jurisdiction, just as the entire island lay under British jurisdiction until those heroic men seized the GPO a hundred years ago. But the Irish people of the south, and a considerable number in the north, don’t want to think of that, for a whole range of reasons. They are being trained to think of ‘Ireland’ as the part that’s south of the border, with the north-east no more than a troublesome and noisy neighbour with whom they have little in common.

In some ways, contemporary Irish thinking isn’t a million miles from that which prevailed in 1911, when a royal visit to Ireland by George V and Queen Mary brought enthusiastic, flag-waving subjects to choke the streets in greeting. Just five years later a group of desperate men seized the GPO and turned Irish history on its head.

What would it take today, I wonder, to awaken the Irish people from the deep and deceptive sleep into which they’ve been encouraged to fall?  Yesterday in Dublin was a colourful day, but it was built on more than one major lie.

53 Responses to The Easter Proclamation: the dream remains a dream