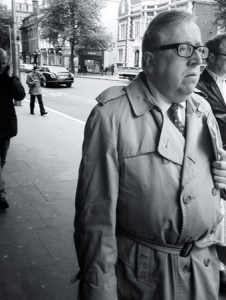 I wonder if the Indo has thought of recruiting Simon Heffer. If they do, he’ll surely slip smoothly into place alongside its present coven of columnists. Here’s Simon in the Daily Telegraph yesterday:

“One would have needed the proverbial heart of stone not to have laughedwhen Gerry Adams was denied entry to Barack Obama’s St Patrick’s Day reception by high-handed security staff. However, Mr Obama posed grinning with another scoundrel, Martin McGuinness. Memories of 9/11 and what terrorism really means were, I thought, stronger than that in America. I am also always surprised that the IRA’s love of Ireland is such that they choose to spend their national day not in beautiful Dublin, but in the United States.”

If that’s not a classic paragraph penned by someone who has managed not to move an inch in his thinking since about 1974, my big sister is Maud Gonne. No ifs, no buts – Adams and McGuinness, pair of scoundrels, should spend their national day in …Dublin? EH? Maybe I was hasty with that 1974 judgement. This man appears to believe in an Ireland unencumbered by the border, with his suggestion that the two northern scoundrels should be spending their Paddy’s Day in Dublin. A foreign country, many of us in the north would claim. Yet here’s Simon, talking like a post-reunification pundit. Anyway, it just shows – never rush to judgement. You think you’ve got a man like Simon figured and boom! He reveals his they’re-all-paddies side. Write that man’s name down and see he’s invited to next year’s White House bash.

Meanwhile, I’m tempted to think there may be another election on its way in the south. Several voices have been raised in recent days, calling on all politicians to be involved in trying to form a government. Sometimes these voices name Sinn Féin as being prominent among those who prefer to stand and slag, rather than take off their coat and work for a new government. Yes, Victoria, of course it clashes with the Fine Gael/Fianna Fail pre-election promises that they’d under no circumstances get involved with Sinn Féin post-election; but if there was another election, it’d be a good brick to throw at the Shinners, wouldn’t it?  They’re the guys to blame for the people having to go through the tedium and rubbish of a second general election in months. Punish them in the voting booth, would yis?

There’s also been a lot of talk about Gerry Adams’s non-admittance being linked to IRA activities in the past; and Ruth Dudley Edwards is in full cry in today’ Sindo, telling anyone who reads her that Patrick Pearse had a cast in his eye, was incapable like all in his family of having normal sexual relationships – in fact was terrified of women – plus he liked to daydream about kissing young boys on the mouth. Damn republicans – if they’re not blowing people up they’re kissing young boys.

So there could indeed be another election within months. I’d say there definitely will be another election inside months, except that the Sindo does the Shinner-slag every week, regardless of elections. And since this oft-mounted assault on the same weary target does be getting tedious from time to time, fresh blood in the form of Simon might be just what’s needed. So hello, Simon – this is Jim and that is Ruth. I know you three are going to have so much  to talk about…

4 Responses to The Rumour Mill: could Simon Heffer be going to the Sindo?