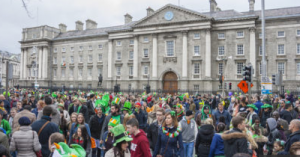 There appears to be general agreement that the south’s Easter Rising commemorations (so far) have gone extremely well. The rain held off, the people came out – there was a rejoicing in the courage of the handful of men who challenged an empire and created conditions for its defeat. I heard of no instance where a citizen of the southern state said “Here, we should stop codding ourselves. We haven’t got within an ass’s roar of the republic declared by Pearse and Co.”

Why is that? Well, like it or not people take their lead from the media. Occasionally they over-ride the media and take things into their own heads and hands, an example being the mass demonstrations against water charges. Another might be the reception that the Love Ulster brigade received when they visited Dublin some years back. But by and large the media make clear what public response should/will be, and the public breathe this in and accept it as a given.

So none of the people on the streets of Dublin and other southern cities called a halt in their festivities to reflect on the appalling government they had endured for five years, or on the broken health system, or on the housing famine or the mass emigration of their sons and daughters. Does that mean they have wiped their minds clean of such foul-smelling matters? I think not. One thing the Irish people are good at is having a party, and over last weekend they paused for a mass party.

So although in my gloomier moments I’m tempted to think that the southern population regard northern nationalists/republicans as a pain in the ass that they wish would go away, just as the people in Britain see the northern unionists as a pain in the ass they wish would cease to exist, I think it’s more than that. The very fact that the southern population were partying over what Easter 1916 had delivered for them doesn’t mean they don’t know a lying, oppressive government when they see one, and it doesn’t mean they don’t have a sense of Ireland as stretching from Derry to Dingle and Newry to Achill. It’s just that they’ve been taught it’s not polite – maybe even dangerous – to talk of such matters in public. But it’s a superficial lesson they’ve been given. Change the media environment along with the government and we might be surprised at what lurks in southern hearts.

15 Responses to You can’t party forever