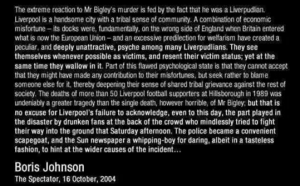 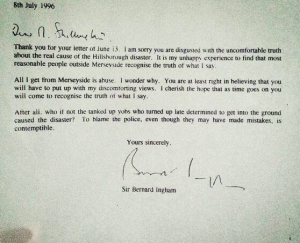 If there’s one thing the British establishment is very good at, it’s lying. They do it with a convincing thoroughness and consistency that makes even those who know the truth doubt themselves.

I remember the immediate aftermath of Bloody Sunday in Derry. I was living in Canada at the time and a columnist in the local paper, one Shaun Herron, a cousin of  loyalist paramilitary Tommy Herron, informed his readers that every single one of those shot dead by the British army had been carrying a weapon: he knew this because he had received this information from a rock-solid source within British intelligence. Meanwhile back in Derry the Widgery Commission was being put in place to later vomit up its lies about who was to blame and who wasn’t.

And now, also decades later, we have the truth come tumbling out about the Hillsborough disaster. As you’ll see from the attached pics, both Boris Johnson and Bernard Ingham were nothing if not adept at reinforcing the lies which had been told; and again they did so in a way that made those who’d claim otherwise appear as pathetic, deluded, self-pitying fantasists. What a pity Thatcher wasn’t around longer to get to know and love Boris Johnson.  Ingham and Johnson share the same bulky, shambling frame; they also share the ability to make unfounded claims, aka lies, and the ability to portray their accusers as bad or bonkers or both.

Thatcher and Ingham were well met. Let’s hope London has the sense to kick into political oblivion the mayoral candidate whom Johnson is currently recommending. If you wouldn’t buy a used door-handle, never mind a car from this man, why would you buy the likes of the billionaire Zac Goldsmith, son of the unspeakable Sir James ‘Goldenballs’ Goldsmith?