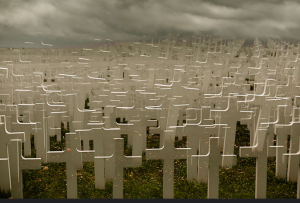 In 1929 Erique Maria Remarque’s novel, arising from his experience of  serving with the German army  in the Great War, was published. He had confronted the French, to the West of him, and the book’s title in the German language and in its English translation attested to that fact. In English its title was  ALL QUIET ON THE WESTERN FRONT. When the NAZIS came to power Goebbels had the book banned for its anti-war sentiments but had no problem with its title.

In 1929 Robert Graves, who served in the British Army, in the Great War, facing the Germans on French territory, published Goodbye to All That. He records that he was in Ireland in February 1919 after the Anglo-German Armisice when he got a telegram from the WAR OFFICE agreeing to his demobilization, but the following day was told that demobilization of British troops in Ireland was to be stopped, because Ireland, unlike France
was now “officially a theatre of war.”
It is customary for the British to refer to the theatre of war where Robert Graves faced the Germans as “THE WESTERN FRONT.” But it is, surely, a rum and a wacky usage. If it was Germany’s Western Front, it seems to me that it was for the Franco-British Allies their Eastern Front.
Britain’s Western Front in 1919 was in Ireland, on the Liffey. the Shannon and the Lee, and on other Irish rivers then and since. Britain’s Propaganda Front  still  faces, and tries to efface, Ireland.

View all posts by Jude Collins →
Never mind if it was true: Ken Livingstone is anti-Semitic!
THE SECRET