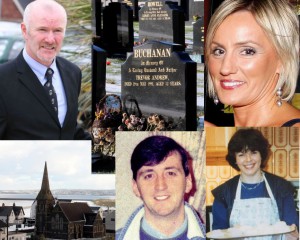 Before the month is out I could almost guarantee that everyone will have something to say about the new crime thriller about to be aired on television. It’s not a new Scandi-noir with a jumper-wearing heroine ,which were all the rage last month, nor is it the new series of the delightfully bloodthirsty Game of Thrones, replete with beheadings , casual butchery and drunken dwarf-sex. It is based on a true story and the events happened locally during a time when the denizens of Norneverland were mostly otherwise engaged on the political landscape and the shenanigans of the various politicians and para-militaries.
It has everything to engage anyone hoping for cheap sensationalist spills and thrills ,though. The fact that it had happened locally only makes it more coyly interesting in the same way that fans of the aforementioned Game Of Thrones avidly scan their television screens for recognisible landscapes and locations.This story has all that any thriller-writer would need for inspiration. There is illicit sex, old- time funamentalist religion, singing , sanctimonious preachers and the murder of a housewife and a policeman, which are some of the usual pre-requisites of a good crime thriller.
It is still a madly unbelievable yarn for all of that. The events are barely conceivable even among a community long exposed to day -to -day politically inspired violence and rabid bible-bashing , which is probably why the murders lay undiscovered for so long and probably would never have come to light at all.
The full horror of the murders were hidden for many years until one of the perpetrators allowed his guilt to finally entrap the two of them for lengthy prison sentences years after they had both moved on to different lives and their dire deeds had been forgotten by all but the family members who had been left to grieve.Prior to this reveal everyone thought that the two murdered victims had taken their own lives, gassing themselves in a suicide pact because of their partners’ betrayal. It was much more than betrayal; it was calculated cold-blooded murder.
The murders happened in Coleraine and were perpetrated by Colin Howell, a dentist and Hazel Buchanan a Sunday school teacher. Both were already steeped in fundamentalist religious fervour ; both were unsatisfied with their spouses, one of whom was a policeman and they became lovers.The murders really happened , unbelievably,because the pair’s religious beliefs would not allow them to divorce , yet that same odd religiosity apparently had no real problem with something like lust and murder. It’s a strange one, especially when you consider that the dentist’s religiosity and belief in an all- seeing god led him to eventually confess to the two murders which no -one would ever have suspected him of otherwise. Had he not had that old-time religion he would have been scot free to this day.So it is a complex mental state to be in.
When it comes to mental-health issues and illogical behaviour ,sex and religion will usually rear their heads .People working within the mental health sector find that many mental-health problems have their basis in three things….money, sex and religion….and so it was in this particular case.
I will not go into the lurid details of the story because doubtless anyone wanting to see it will do so and the case is in the public domain anyway.What I do question is why anyone should have a problem with the making of the filmed series in the first place ,as some have already made voice . Many television series have been made about murderous activities . In fact the crime -thriller is a well -known genre of contemporary fiction. There have been many true-life cases made into films and there is obviously a prurient attraction for this kind of drama. Maybe the fact that this has happened in such close and real proximity and isn’t happening in faraway Scandanavia is what distinguishes this very true , but mundanely horrific story, from all the others.

View all posts by Harry McAvinchey →
EAST IS EAST? by Donal Kennedy
Thrilling election we’re having, wouldn’t you say?

2 Responses to THE SECRET