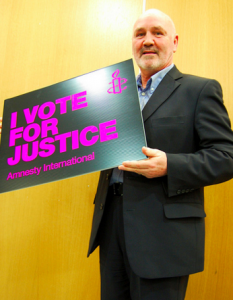 Is it just me? In the north here, there’s an election campaign going on here, and even though we’re less than a week from voting, I find I’m only marginally interested in it. Not like me. Maybe I’m coming down with something.

Or maybe it’s just that the election in the south and the manoeuvres of the two big parties there has fascinated me. That’s fascinated as in there’s- a-snake-trying-to-swallow-a-frog fascinated. Or maybe the other way round. At the time of writing, the two parties are finally moving to consummation point, which is fun to watch even if you do feel a bit dirty afterwards. And there is a colour and variety to some of the political figures south of the border: the Healy-Rae brothers, that little FG chap with the lisp, Michael Noonan, Shane Ross. All human and some near-human life is there.

In that respect, you could feel a bit sorry for northern unionists. For them, the south is a weird, limited place. Great scenery,  especially in Donegal; funny accents, some of them impenetrable; people who perversely don’t see London as the centre of the universe. Dublin – a good place to go for a rugby match or a stag party but really that’s it.

And then it struck me: maybe northern unionist thought has moved on. Could it be that, far from being a little bored by the south, northern unionists are looking at southern politics with increasing interest? If they are, I suspect the reason for it can be summarized in two words: Sinn Féin.

Ah. Sinn Féin. The party which the DUP warns its followers about. The party that’s an increasing threat to unionist hegemony in the north. The party which keeps on getting more Dail seats in the south. And nightmare of nightmares, except the ‘Keep Arlene First Minister’ posters work, Sinn Féin the top-dog party in the north. Worse still, Sinn Féin in power in both parts of Ireland – is it becoming a when rather than an if?  An unnerving thought.

Certainly it’s Sinn Féin’s ambition. Not to unnerve unionists (although they could live with that) but to be in power in the south and in the north. It will send a strong message to the world, never mind Westminster, that Ireland is a country that’s been artificially divided. Come the day Sinn Féin is involved in a major way in government north and south, comes the day when Irish unity is imminent.

But would it be? Yes, Sinn Féin could some day be in power throughout Ireland, and yes, that would be more than a little unnerving for unionists. But would it actually mean that a united Ireland was just round the corner?

No, because there will be no change in the constitutional position until a majority in the north and the south vote for that change in a referendum. And there are an awful lot of what could be passed off as nationalists both north and south who would baulk at the idea of putting an X in the Yes box in a referendum.

That’s not to say Sinn Féin’s growth in the south hasn’t been spectacular. In a little over ten years, it’s gone from having four TDs to having twenty-three. Such progress must be heartening for nationalists/republicans and heart-scalding for unionists. But what they and a lot of nationalists/republicans north and south of the border tend to turn a blind eye to is, what comes next? Sinn Féin dominance in politics north and south is a stirring story. But the fact is, there will still be an awful lot of work to do after that.

Watching the growth of Sinn Féin throughout Ireland must be a heartening experience for the party’s supporters. But that growth alone won’t provide a final answer to the Irish Question.

View all posts by Jude Collins →
THE SECRET
Free money!

23 Responses to Thrilling election we’re having, wouldn’t you say?