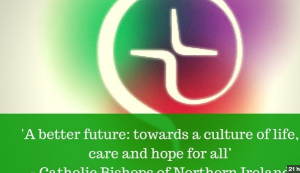 I was asked to contribute to this morning’s Nolan show on the letter issued by the north’s Catholic bishops, which highlights what they consider important questions in the upcoming Assembly election. Ten minutes ago I got a text telling me I wouldn’t be needed after all. But on the basis that you should never throw anything away ever, here are my thoughts.

The Catholic Church, like any faith or religion, has a right, even a duty to comment on moral matters. Politics is all about making choices, very often moral choices. So it makes sense for the north’s bishops to present their views alongside those of everyone else.

In the pastoral letter, the bishops include ten questions which they urge voters to ask (respectfully) of those who come seeking their vote. Since it’s reasonable to assume that those thinking of voting DUP, UUP, PUP, TUV or even Alliance will take little heed of anything the Catholic bishops may say (quite a few believe the bishops and their flock are on the high road to hell), I’m assuming that their letter is in the great majority of cases directed at Sinn Féin and SDLP voters. And that’s where I begin to feel uneasy. How uneasy? Let me count the ways.

I could go on. Some points I agree with, others I don’t.  Apart from the implied need that election candidates should come up with the right answer to all ten questions (or do they?), there’s the matter of what doesn’t appear on the question list. For example, where does the candidate stand on the £100bn that the Tory government plan to spend on nuclear armaments in the coming years? While the bishops rightly call for candidates to commit to resolving the scandal of child poverty, there is nothing about poverty in general, world poverty, how  inequality in society should be tackled. And while they urge candidates to budget for a free school breakfast for children who otherwise might go hungry, they say nothing about the continuing practice in some schools of selecting pupils on academic ability.   All the research indicates that this warps the primary curriculum, creates social division largely based on class, and delivers a body-blow to the confidence of young people, a body-blow from which some never recover.

Summing up I’d say the Catholic bishops indeed should articulate Church teaching on matters relevant to the world of politics. But to boil that teaching down to ten questions, and even provide the wording for voters to use when questioning candidates, is patronizing. Don’t Catholics know Church teaching? Aren’t they capable of reading party manifestos and drawing their own conclusions?Finally, while the bishops’ letter doesn’t tell Catholics which party to vote for, they do seem to be hinting that good Catholics will follow the Catholic bishops’ historical line on republicanism.

View all posts by Jude Collins →
On staying atop the greasy pole
Never mind if it was true: Ken Livingstone is anti-Semitic!