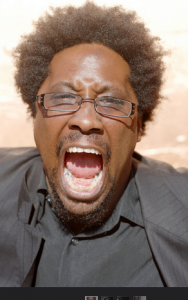 Ninety-eight percent  of American TV, as you know, is rubbish. The remaining 2% can be very good, but you might have to do a bit of digging to find it.

One TV show that must be in the top 5% is called United Shades of America. It’s on CNN and is presented by a very big, very black, very funny comedian called W Kamau Bell. In it, he explores matters you might not expect. Like how the police treat black people. So he goes on patrol with a black policeman, who explains the need for law and order, and then hands him over to his white colleague for further foot patrol. “I’ve never felt so good, being handed over from one cop to another” Bell tells the camera.

He tries out virtual reality training for cops, where they’re called on to react to potentially lethal situations. Bell ends up “killing” one of the (black) attackers in the simulation. “The cops liked me after” he says in an aside. “They were clearly surprised I hadn’t shot everybody”. He notes that the virtual reality training appears to have scenarios for dealing with black guys in all sorts of violent situations. “Only I don’t see no scenario for cops dealing with a black guy who’s minding his own business”.

On the beat he sees cops stop and exchange small talk with black people in a rundown neighbourhood. That’s nice, he reckons, but it’ll take maybe three hundred years before the approach solves the police-African-American problem. And when he talks to an old NAACP guy, he’s reminded that community policing doesn’t work too well if the community policeman doesn’t live in the community.

Interesting, but unfortunately no lessons for policing here.

Having dealt with the touchy subject of how the police deal with black minorities, Bell tackles the even touchier subject of how the Ku Klux Klan deals with black minorities. So he checks out a town called Camden in New Jersey, where practically all of the population are white – maybe something to do with the KKK having a headquarters there. He meets a KKK wizard in full white robe and hood – in the dark on a lonely road. “We are pro-white 100%. We just want other races to leave us alone” the guy in the white hood with the muffly voice tells him. At a cross burning he’s told “In the Bible, God tells us not to mingle our seed with the beast of the field. We follow the teachings of the Lord.”

In Harrison, Arkansas, he meets a Knight of the KKK – which, Bell notes, makes him a KKKK. He gets invited to Pastor Thomas Robb’s compound, where he meets former neo-Nazi Billy Roper, who’s busy teaching white youth about things like sending black people back to Africa. When Bell observes that his daughter couldn’t play in this all-white playground supervised by Billy, Billy comes right back: “My daughter wouldn’t be safe playing in black play-grounds”

So let’s see then: policing and minorities, and blind bigotry with a dash of fundamentalist religion. I thought for a minute there might be a parallel with here but nah – unique and of no relevance to our happy society. I don’t know why I went to the bother of writing this blog about it.

24 Responses to American TV: entertaining but of no relevance to us