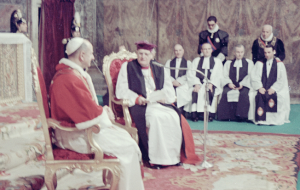 Today, May 29, is the 100th Anniversary of the end of the 300 day  1916 Battle of Verdun,  where an estimated 700,000 French and German soldiers were killed. Yesterday, May 28 THE TIMES had an article celebrating a happier,  anniversary, the 50th of the meeting of Archbishop Michael Ramsey of Canterbury withPope Paul VI in Rome. The most recent previous meeting of an Archbishop of Canterbury with a Pope had been in 1397, when Thomas Arundel fled Canterbury  for Rome as a fugitive from King Richard II.

In 1397 Canterbury was in communion with Rome but by 1966 had been estranged for over 400 years. The 1966 meeting signalled the end of a long Cold War and the development of long overdue warm relations between the institutional congregations more in tune with the personal intercourse between their adherents.
Not all professed Christians were happy with this development. Indeed one native of the Primatial  City of Armagh,  raised in Ballymena, made a pilgrimage to the Eternal City, to raise his voice a few decibels to protest about the meeting. The visit and the protest were noted in the Italian papers. Italy has many daily papers devoted entirely to football and the citizens take political and religious issues less fanatically.
I’m told that many Italians thought that English footballers could do with all the prayers they could get and if the England manager could get the Pope to put in a good word for his ragazzi  with his Boss Upstairs, what was the harm in it? As it happens Alf  Ramsey’s ragazzi took the World Cup a few weeks later.
Perhaps England may win it again, 100 years  after Michael Ramsey’s Roman visit?

View all posts by Jude Collins →
Brooklyn and the Irish
American TV: entertaining but of no relevance to us