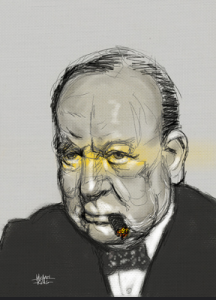 I don’t carry a revolver nor a censor’s blue pencil nor have I ever handled either. Otherwise I would be tempted to use the lead from one on anybody using the word “iconic” and the lead from the other on the word in print.

On 15 May THE SUNDAY INDEPENDENT carried a review of “Churchill and Ireland” by Paul Bew, published by the Oxford University Press, and the paper’s headline was as above. It went on “The iconic British Prime Minister had a long, intimate and often affectionate relationship with this country , says our reviewer.” Certainly the reviewer,Eamon Delaney ,has an affectionate relationship with the hulking statue of the old brute in London’s Parliament Square,  just as he has a hankering for the Dominion status forced on Ireland by the brute in 1922, for he is a member of the inappropriately named “Reform Group” which wants Ireland to formally acknowledge British domination. Those who have enjoyed the “Despicable Me” films will recognise the “Minion” Complex.

Certainly Churchill had a long and intimate relationship with Ireland. In 1912 troops were moved from Leinster, Connacht and Munster to Belfast to protect his hide from the Orangemen when he went there to speak for Home Rule. THE TIMES was full of the story for a couple of weeks before he went there, and his doting Mama tore herself away from other concerns to see him off from Euston Station. The text of his speech in Belfast was telephoned to the paper in London, a first, ranking with the radio message that resulted in Dr Crippen’s arrest on the high seas. Indeed Churchill was reported on the desirability of sending a Dreadnought or two to put manners on the Orangemen.

A few years later he let loose the Black and Tans on Ireland and connived at the financing and arming of the B Specials, although the 1920 Government of Ireland Act precluded Stormont raising armed forces. The inquest on the murdered Tomas MacCurtain, Lord Mayor of Cork, specifically implicated Churchill in the crime. He was no more happy with Ireland and her choice of government in 1945 after de Valera had emerged victorious from five successive General Elections. Churchill had never led a political party to victory and in 1945 British soldiers in uniform booed him in public and British voters booted him out. Even when his party won a Parliamentary  majority in 1951 it garnered less of the popular vote than the Labour Party.

In 1948 when de Valera lost power he could visit India and be given a huge welcome. India lost more dead, civilian dead, from a Churchill engineered famine in 1942-1943 than the Brtish Empire’s forces and civilians had lost in the two world wars (if we discount those famine dead). Churchill, had he visited India, would have needed more troops to defend him than he had in Belfast in 1912.

Michael Portillo has recently revealed how the “visionary” Churchill intended that Britain, aided by the United States, and he hoped eventually German troops, to attack the Soviet Union in July 1945. British soldiers who booed his election meetings were instinctively sound. The Soviets, by crushing the Wehrmacht saved many a British skin. Churchill had inspired a similar stunt after the 1914-18 War.

I have’nt seen or read Professor Bew’s book, but what little I have seen of his work has not convinced me of his good intentions.

And I don’t think I could trust anyone who loved me as Churchill  loved Ireland. I’m not convinced that the people of England were as dear to him as he was to himself.

8 Responses to CHURCHILL: THE IMPERIALIST WHO LOVED IRELAND by Donal Kennedy