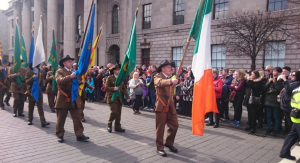 British  Ministry of Defense officials and other denizens of the Whitehall government complex behind # 10 Downing Street were jubilant.  The source of their joy?  Through their media tentacles the British continued to dominate   both sides of the Atlantic with  revisionist views of the 1916 Irish Easter  Rebellion.  The 6 day battle signaled  the beginning of the end of the British Empire.   To send a message it had  to be savagely crushed with murder and extra-legal executions.  The British still perpetuate myths and smears about the revolt.

Few U. S. media outlets chose to cover the anniversary of the week long conflict;   a success in itself for the British.  No matter.  Pre-emptive book reviews and commentary  diminishing the character, bravery, vision and determination of the rebels were at the ready.   President Obama managed a reference to the  Easter Proclamation but was  silent on British undermining of the Good Friday Agreement.  This from the man who has an opinion on bathrooms in North Carolina and tells  the British people how to vote.   Instead of reporting the historical significance of the rebellion,  many U. S.  media went with Betty’s 90th birthday or the  curious suspicious story of Jesuit Professor Seamus Murphy’s claim  that the revolt did not meet criteria for a  just war.    The issue was a stretch even for an egghead Professor but take it to the bank he is no Fr.  Berrigan.  Some media even managed to find space for deprecating remarks   about the Easter Rising  and its aftermath  from well known expert on the Irish conflict….Sir Rat of the Boomtown Rats, Bob Geldorf,  Take it to the bank he is no Bono who dares to to speak of Dublin Monaghan victims.

Michael Curtis in the American Thinker somehow managed to describe events following the rebellion without referring to  partition, re-unification of Ireland, treasonous Protestant bigots, mutinous British Army leaders or the 1918 election victory of Sinn Fein.  He states “the country has been divided..” as if by consent or democratic mandate  instead of force.    Several articles used phrases that smelled of British propaganda.  The use of the phrase “ blood lust”  by Ferghal McGarry  and others  referring to  Padraic Pearse  who welcomed death in the cause of freedom. You will not find any such phrase used in a British textbook or by a British historian to describe the Empire despite the savage slaughter of millions.  Only the Irish could have a ‘blood lust.’ Irish historian  Ruan O’Donnell retorted that the “…myth of the blood sacrifice should be laid to rest.” In film, book reviews and editorial opinion the phrase “… most Dubliners…”  was  used to describe residents opposition to the  six day battle.  Ask yourself.  Isn’t it more likely that phrase was supplied by loyalists or by those fearful of  20,000 troops.  Dublin  was in 1916…and to some extent still is…in 2016 a company town whose inhabitants  and media lived off British favor and whose newspapers like todays  Independent (sic) were  government mouthpieces.   No unbiased survey was taken.  The phrase was a press release prop.

Katherine Whittemore of the Boston Globe was one such journalist who apparently  lent some credence to the “..most Dubliners…”nonsense.  She inferred   that   the Irishmen who led the fight on Dublin streets were less  worthy of recognition than the Irishmen  who  joined the British Army in the true  ‘blood-lust’ royal squabble known as WW I. Many of the 30,000 Irishmen who died  were Nationalists  who  actually believed  the British were  going to grant Ireland independence after the war. All the while  British Parliamentarians like Bonar Law and Randolph Churchill supported  arming  a gang of Ulster loyalists to insure partition.  That  would be like Members of the U. S. Congress supporting  thousands of Oklahoma City bombers.    Keeping  large segments of the Irish people poor was a despicable colonial tool to replenish the ranks of the Army.

But let’s look at the big picture of British recent successes.  The  Telegraph, England’s Tory mouthpiece, continued its tradition  of scaremongering articles about threats in N. I..  The article claimed, without a single identifiable source,  that   N. I. is now a playground for ISIS .  Decades ago it was the Communist threat.  Now  MI-5 and the British Army play nice together when seeking more money for their mischief in N. I.     The Irish sounding reporter  Kate McCann was a nice  touch.   In Ireland Ministers Allan Kelly and   Charles Flanagan can’t say enough  wonderful things about the British.  This from the same government that gets  a two fingered salute from England  when it begs for more data about MI-5 and Army involvement in the  Dublin Monaghan  mass murder.  The British take particular pride in their neutering of American officials all in the name of the ‘special ‘relationship; one  which is more parasitic than special.  President Obama proclaimed   “…the US will always be a wind at your back…” and Vice President Biden exhorts  “…if we have a moral obligation to other parts of the world why not Ireland.”  These  empty meaningless phrases  delight British diplomats and make Whitehall rejoice!  A conference recently held in Washington on the Good Friday Agreement was the typical invitation- only no questions asked  foreign policy briefing which insures that British funded think tanks will always know more  about N. I. than American citizens.

However, some good news!  A Freedom of Information release discovered a demand from Margaret Thatcher of  Irish Taoiseach  Jack Lynch that  RUC officers be present at Gardai interrogations of IRA suspects.  The release did not indicate the response from the Irish government.  I’d like to think it went something like this:  Margaret when you produce the  list of all those accountable  for the slaughter of 34 innocent people in the act of war euphemistically called the Dublin-Monaghan bombings, you can have your Gardai-RUC cooperation.  But hey that’s just me!

View all posts by Jude Collins →
‘Remembering the Enemy Dead, but not forgetting the enemy’ by Donal Kennedy
‘ Pride and Prejudice’ by Jessica McGrann