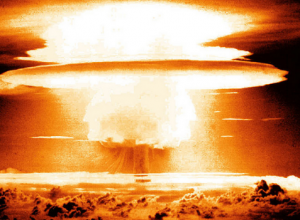 I remember once, in the Christian Brothers primary school, being punished for having punched a younger boy. The Christian Brother made a little speech about how cowardly and detestable it was for someone to assault someone smaller and weaker than themselves. He then beat the tar out of me. I mention this, not because I’ve harboured a hatred of that Christian Brother ior CBs in general. I mention it because of British arms sales and because of a visit by President Barack Obama.

Yet with all this, Britain never ceases to express her horror at  political violence, and urges all good people, including here,  to rally behind the cause of peace.

A few days back, President Barack Obama visited Hiroshima. He expressed his sadness at the loss of life in that city when the atomic bomb was dropped on it: “A flash of light and a wall of fire destroyed a city and demonstrated that mankind possessed the means to destroy itself.” He forgot to add  two things. One, that the flash of light and wall of fire didn’t just materialise out of the sky: they were created and inflicted on Hiroshima by the United States, killing somewhere between 90,000 and 146,000 people. Three days later the US dropped another bomb, this time on Nagasaki, killing somewhere between 39,000 and 80,000.

As you probably know, President Obama’s visit was appreciated by the Japanese as the first visit to Hiroshima of a US president. What Obama’s remarks didn’t include was regret that the bomb had been dropped: he emphasised the dangers of nuclear warfare, but felt no need to apologise to the Japanese for inflicting such mass death on them. It was the ultimate example of terrorism, and it worked: within days the Japanese had surrendered.

I suppose you wonder what 100,000 dead people look like. It looks like the Omagh bomb being detonated every single day, including Sundays, for three years. Except worse, because the Japanese people were either vaporised or suffered appalling burns and radiation sickness, the effects of which some are still suffering.

Where are the prominent commentators to denounce Obama’s pretend-regret and Cameron’s human-life-is-sacred stance? Both leaders have no moral authority to lecture Irish people or anyone else, since they’ve capped any Irish violence in recent years by 3,000%.Talk about the emperor having no clothes: neither leader has one-hundredth of a figleaf to cover their bloody deeds.

43 Responses to On the use of violence for political ends